Traveler Flying Through Another Dimension

Distant Traveler (Distant Traveller in the European English version) is the fourth and only extra level in Kirby: Triple Deluxe’s Dedede's Drum Dash sub-game. It succeeds Dedede's Theme. It is unlocked by completing the three previous levels with a high enough score.

King Dedede bounces across drums in the early morning while collecting Musical Coins. Purple trees, a Ferris wheel, a castle, and various other structures decorate the background. The sun and clouds appear as cardboard cutouts suspended in the air by strings. Part of the sky is magenta with a wavy rainbow pattern.

As a secret level, Distant Traveler is designed to be the most challenging level in the sub-game. In addition to a fast tempo, all hazards from the past levels are present: Passing clouds hide coins or enemies, winged drums move side to side, and collapsing drums break after Dedede bounces on them twice. Many enemies also inhabit the level: Gordos and Big Gordos hover in the air, Bronto Burts dart left and right, Bouncys spring high into the air, Soarars swoop in and out of the foreground, and Swordorys routinely thrust themselves forward in a stabbing motion. Gordos and Big Gordos are most plentiful here; the king is expected to bounce through or over columns of them. Unlike the previous levels, the player is given three hearts instead of five, making enemies more threatening. The level ends when Dedede reaches the Goal Drum and launches skyward.

The music that plays here is "Distant Traveler" from Kirby's Dream Collection Special Edition. The player is given one minute and 45 seconds to clear this stage. 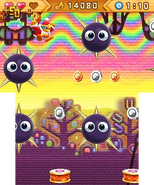 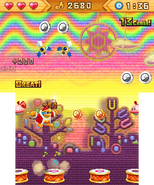