A dimensional rift[1] is a phenomenon in the Kirby series, debuting in Kirby's Return to Dream Land.

A dimensional rift is a tear in the fabric of reality that allows one to travel to and from other dimensions, mainly Another Dimension, and even time. They appear when the fabric of spacetime has broken down, or can be forcefully opened by powerful beings or objects. While their appearances vary, their most common look is that of a star-shaped portal with a blue outline and a space-like interior.

At the beginning of the game, the Lor Starcutter opens a rift in the skies of Dream Land and crashes onto Planet Popstar, scattering five of its main parts and Energy Spheres. The Energy Spheres distort space, creating rifts into Another Dimension. After recovering the five main parts and repairing the Lor Starcutter, the galleon creates a rift and travels through it to reach Halcandra.

After Kirby defeats Landia in Dangerous Dinner, Magolor takes the Master Crown and reveals his true colors. He opens a rift directly to Planet Popstar and rushes through it, intent on conquering Planet Popstar and the universe with his unlimited power. Landia teams up with Kirby, Meta Knight, King Dedede, and Bandana Waddle Dee, and they give chase. After defeating the Magolor (and Magolor Soul in Extra Mode), Another Dimension begins crumbling, with the rift to Popstar shrinking. In the nick of time, the Lor opens the rift briefly, allowing itself and the group to escape through it.

After ensuring that Kirby and the rest of the group are safe, the Lor and Landia return to Halcandra through another rift.

On Kirby's adventure to recover these parts, the hero can use Super Abilities to uncover hidden rifts. Entering one strips Kirby of his Copy Ability and thrusts him into a grayscale pocket of Another Dimension, which is based on the stage the rift is a part of. The dimension begins collapsing immediately, with a purple layer steadily moving to absorb everything. This pushes Kirby forward if it catches up to him and can crush him if another wall comes up in front of him. As such, Kirby must flee through the area. Star Spitting and launching a Team Attack at the layer pushes it back slightly, buying Kirby a few seconds. Enemies and items from Dream Land and Halcandra appear in these dimensional pockets, presumably pulled into the rift previously. If Kirby is KO'd in Another Dimension, he is ejected back out the entrance and can choose to reenter.

After escaping the layer, Kirby is given a choice of two Copy Essences before fighting one or more Sphere Doomers, inhabitants of Another Dimension. When defeated, they drop two Energy Spheres. When Kirby collects them, the rest of the area regains its color. The hero can then consume a Maxim Tomato and exit Another Dimension through the entrance. The rift closes after Kirby exits.

In battle, Magolor can open small rifts to release Sphere Doomers as an attack. In his second phase, Magolor opens rifts to travel through, fire lasers into, and release spikes from.

Dimensional rifts appear in the same locations as in Main Mode and are nearly identical in design. There are minor changes, however. The rift entrances appear purple instead of blue. The layers are a reddish color and move faster than in Main Mode. Additionally, some enemies inside the rifts are scaled up or down in size. Sphere Doomers, now known as Sphere Doomer EXs, look and attack differently.

In battle, Magolor EX can open small rifts to release Sphere Doomer EXs as an attack. Magolor Soul opens rifts to travel through, fire lasers into, and release spikes from.

Purple rift entrances also appear to transport Kirby to the last five rounds of bosses in The True Arena.

At the end of the Meta Knightmare Returns sub-game, the Mother Computer, Star Dream, activates the previously prohibited Time-Space Transport program to open a dimensional rift that Galacta Knight descends from in order to test Meta Knight's strength. During the fight, the warrior can cut the fabric of space, creating a seam that expels energy from Another Dimension. When the battle is over, Galacta Knight, encased in a crystal, exits through another rift.

When playing the Guest Star ???? Star Allies Go! sub-game as Magolor, some stage layouts in Levels 1, 3, and 5 are changed to reflect Stage 1 of Cookie Country, Stage 2 of Nutty Noon, and Stage 3 of Dangerous Dinner. The dimensional rift sequences are replicated by having Magolor enter optional doors and enter recreated areas presented in grayscale. Sphere Doomers are represented by Bronto Burt Room Guarders and Vividria mid-bosses, and Magolor can collect Power-Up Hearts or Picture Pieces instead of Energy Spheres.

In the Guest Star ???? Star Allies Go! sub-game, Hyness opens a dimensional rift and appears to be performing a sort of spell on it. After Hyness is defeated, the credits reverse to reveal Galacta Knight emerging from the dimensional rift. Afterwards, it closes.

In the Heroes in Another Dimension sub-game, Hyness's repeated chants and prayers open dimensional rifts in The Divine Terminus that lead to Another Dimension. The rifts do not resemble a classic rift, but Kirby's warping animation is roughly the same.

Near the end of the main story, it is revealed that the hostile lifeform known as Fecto Forgo has the ability to create dimensional rifts. This ability was harnessed by the inhabitants of the Forgotten Land to abandon the planet and travel to a "land of dreams".

Fecto Elfilis uses dimensional rifts in many of its attacks, such as thrusting its spear into a rift and reappearing in another one and summoning a massive rift to suck in meteorites. Its form taken after absorbing some of Morpho Knight's power, Chaos Elfilis, can summon many powerful lasers that appear from dimensional rifts.

A dimensional rift serves as a door late in The True Arena. 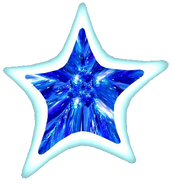