Kirby Wiki
Register
Don't have an account?
Sign In
Advertisement
in: Articles with non-canonical information, Levels, Levels in Kirby & The Amazing Mirror,
and 2 more
English

Boxin, Bronto Burt, Flamer, Foley, Glunk, Gordo, Hot Head, Laser Ball, Parasol, Pengy, Scarfy, Sir Kibble, Sparky, Sword Knight, Twister, UFO, Waddle Doo, Wheelie
The Dimension Mirror is an important item and the final level in Kirby & The Amazing Mirror, following Candy Constellation. It later appears in the Dededetour sub-game of Kirby: Triple Deluxe. It is the gateway between the normal and the Mirror World, and is behind the creation of Dark Meta Knight. Consequently, the mirror has been corrupted by Dark Mind during Kirby & The Amazing Mirror, which lead to it only reflecting bad things.

The Dimension Mirror can only be entered if Kirby collects all of the Mirror Shards (obtained by beating the bosses) that resulted from Dark Meta Knight shattering the mirror early in the game; upon entering the mirror, Kirby will immediately be confronted by the dark knight in battle. If Kirby comes out victorious, he will go face-to-face with Dark Mind in several boss fights. After each of these boss fights, Kirby will be transported to a room with puzzles, recovery items, and the Dimension Mirror that will transport him to the next battle; the rooms have themes reminiscent of Radish Ruins, Cabbage Cavern, and Peppermint Palace, respectively. After besting Dark Mind's first form for the final time, Kirby fights Dark Mind in his true form twice more before the fiend is finally vanquished; after Dark Mind's final form is defeated, the mirror is restored to its original glory and the ending plays. Note that Kirby cannot call the Warp Star using the Cell Phone at any point during this stage, although he can call the other 3 Kirbys if he has adequate battery power left. Also of note is that this stage has no map, likely due to its short, highly linear nature compared to the other stages of the game.

The Dimension Mirror also makes a surprise appearance in Kirby: Triple Deluxe’s Dededetour sub-game. After King Dedede defeats Queen Sectonia DX in Royal Road, the Dimension Mirror appears and creates a darker version of the king, known as Shadow Dedede, that promptly engages Dedede in a fierce duel. After Shadow Dedede is quite literally shattered to pieces, Dedede enters the mirror into the same coliseum Dark Meta Knight's last battle was fought in in Kirby & The Amazing Mirror, and faces off against the dark knight himself. Upon his defeat, Dark Meta Knight is sucked back into the Dimension Mirror; to prevent his escape, Dedede shatters the mirror, ending Dededetour.

According to director Shinya Kumazaki, Queen Sectonia's tyrannical personality stemmed from excessive gazing into the Dimension Mirror[1] after Taranza stole it from the Mirror World and gave it to her as tribute[2].

The Dimension Mirror's inclusion in Dededetour is not canon as the aforementioned sub-game is also non-canon; however, its behind-the-scenes relevance to the rest of the game, such as corrupting Queen Sectonia after Taranza gifted it to her, is still canon. This means that the mirror is not destroyed. 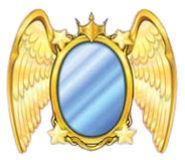 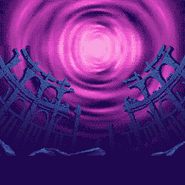 The portal that appears in the background of all the battles against Dark Mind's first form.

The area where Dark Mind's second form is fought. 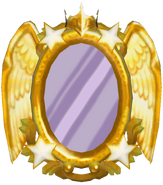