Devil appears exclusively in Devilish Mode. It appears out of an ominous seam, accompanied by its unique theme. It floats around Kirby and generally cannot be touched, as it moves just out of reach if the hero tries to bump into it. If by chance he does touch the enemy, it may grab him, at which point the player must mash the +Control Pad (or rotate the Circle Pad) to break free and avoid damage.

Devil cannot be grabbed with a Yarn Whip. It is also hydrophobic; if it touches water, it panics and exits the pool; the exception to this is Fossil Reef, which is almost entirely underwater. Devil grins if it successfully hurts the hero, and drags him away if it KOs him. If Kirby damages the creature with a Yarn Ball, his Weight form, or some other attack, it drops Beads and retreats for a period of time; it first drops a Star Bead, then 50 Beads, then 20 Beads, then five Beads, then one Bead, and then does not drop more. The foe interferes during boss battles, but not during Metamortex transformation sequences except stages that are centered around them.

When the Devil appears, Kirby can attack it to make it fly away for a period of time. This is beneficial, because attacking the Devil causes it to drop Beads, and it relieves the difficulty of the situation by not having the Devil constantly targeting the player. However, getting the Devil to flee is not always easy, and depends on the situation. The easiest way to deal with the Devil, if possible, if to attack the rift it spawns from, preventing it from attacking in the first place.

The Ye-Devil is harder to get rid of due to his protective helmet. Ye-Devil's helmet protects him from normal Yarn Balls and Marking Pins. The normal way to handle the Ye-Devil is to wait for him to charge, jump over him, and then attack his defenseless backside. With Knitting Needles, if Kirby can make a big Yarn Ball, he can throw that to pierce through the Devil's defenses. With Wire, due to its short range, Kirby will usually have to do the normal strategy of jumping over him when he charges before attacking; in some stages, Kirby is capable of approaching the Devil and can slash him without having to wait. With Button, the Button Bomb's blast radius is large enough to hit him even with the helmet on. With Nylon, similarly to Wire, Kirby has to wait for the Devil to charge, or can approach directly in some stages; using the former strategy, Kirby does not need to jump, as Nylon's main attack makes Kirby invincible, damaging the Devil once he makes contact. With Bobbin, Kirby can throw it out to its maximum distance (which is not quite enough to hit the Devil), and then move away from the Bobbin, causing it to reach the edge of the screen, where it can hit the Devil; if he can be approached, Kirby can just throw the Bobbin when he is close enough. With Marking Pins, Kirby will have to wait for the Devil to charge before jumping over him, as the Marking Pins are blocked by the helmet.

The We-Devil can defend itself by flailing her tail around her, blocking normal Yarn Balls and Marking Pins. The normal way to handle We-Devil is to wait for her to take aim and shoot her sparkling arrow; Kirby can then attack, as she will not be able to swing her tail around for a period of time. With Knitting Needles, if Kirby has a big Yarn Ball, he can throw that at the Devil. With Wire, Kirby can attack the Devil directly. With Button, the Button Bomb's blast radius is large enough to hit her even if she flails her tail around. With Nylon, Kirby can attack directly in a similar manner to Wire. With Bobbin, Kirby can throw the Bobbin at her, which ignores defenses. With Marking Pins, Kirby will have to wait for her to shoot her sparkling arrow before being able to attack, as the Marking Pins are blocked by her flailing tail. 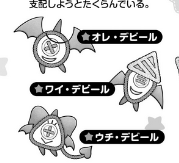 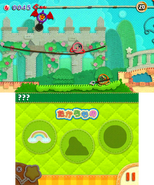 Ye-Devil is harmed by Nylon Kirby

We-Devil shoots her tail in an attempt to attack Kirby