Yuko Mizutani
Demon Frog (Devil Frog in Japan) is a petite yet powerful monster that appears in Kirby: Right Back at Ya! in the 95th episode, Frog Wild. It is the main antagonist of the episode.

For a creature so small, the Demon Frog is able to cause mass panic and hysteria in short amounts of time due to his ability to possess people and make them do evil things. The frog was purchased by King Dedede from Nightmare Enterprises. Upon arriving at the castle, the frog immediately attacked the king and Escargoon, who didn't know about its abilities. Kirby finds the creature floating on a lily pad in a pond by his house. Soon after encountering him, the Demon Frog possesses Kirby and causes problems all over Cappy Town. After the possessed Kirby enters the castle, he starts fighting with Dedede. Tiff was able to shout to Kirby to stop attacking Dedede, forcing the Demon Frog out of Kirby. Dedede eventually steals the frog and uses it to get himself possessed, much to Escargoon's shock. The now powered-up Demon Dedede begins to pummel Kirby. That is soon interrupted when a monster Dedede ordered a while back, Heavy Anaconda, comes out from hiding. It eats the Demon Frog, freeing Dedede from the frog's possession and destroying the creature, while swallowing him at the same time.

Demon Frog is a small round green frog with a yellow underbelly and small purple bat-like wings. It has large orange eyes and purple markings all around its body. Whenever the frog possesses people, the victim gains glowing red eyes, menacing facial expressions, and sometimes even a change in body type.

When he gets possessed by the Demon frog, Kirby greatly resembles what he normally is, but he has bat wings on his back (Only be seen while he's spinning with Waddle Doo) and his eyes get longer and sunken in. The eyes also begin to glow dark red. He is also commonly sneering while possessed too, making evil laughs.

Dedede certainly changes much more than Kirby does when he's possessed by the Demon Frog. His muscles grow to epic proportions and his lower body gets leaner. His robes rip due to the dramatic size increase, and he now has small bat wing-shaped markings on his chest. Like Kirby, Dedede's eyes begin glow red when possessed, but unlike Kirby he also grows small fangs.

The Demon Frog can possess its victim, turning the victim into a evil version of themselves, gaining red eyes and the demon symbol. It can also sometimes give them an increases of both strength, muscles and size, as shown when it possesses King Dedede. The Demon Frog can force his host to do evil things; for example, the possessed Kirby went on a rampage and destroyed much of Cappy Town.

In the original Japanese script, it is stated that the Devil Frog's power works by multiplying the hatred and malice in its victim by 1,000,000. This could explain why King Dedede underwent a much more dramatic physical transformation than Kirby while being possessed by the Devil Frog. Very unusually, it also seems to suggest that Kirby's mind may not be completely free of malice in his normal state, since one cannot reach a number greater than zero by multiplying zero. 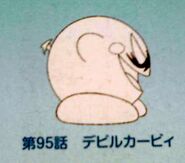 Kirby as he appears while possessed.

King Dedede as he appears while possessed.

Demon frog about to possess kirby