Demon Frog (Devil Frog in Japan) is a petite yet powerful monster ordered by King Dedede in the episode Frog Wild. For a creature so small, the Demon Frog is able to cause mass panic and hysteria in short amounts of time due to his ability to possess people and make them do evil things. The frog was immediately attacked by the king, who didn't know about its abilities, upon arriviving at the castle. The frog is later found by Kirby floating on a lily pad in a pond by his house. Soon after encountering him, the Demon Frog possesses Kirby and causes problems all over Cappy Town. After the possessed Kirby enters the castle, he starts fighting with Dedede. Dedede eventually steals the frog and uses it to get himself possessed, much to Escargon's shock. The now powered-up Demon Dedede begins to pummel Kirby. That is soon interrupted when a monster Dedede ordered a while back, Heavy Anaconda, comes out from hiding. It eats the Demon Frog, freeing Dedede from the frog's possession, while swallowing him at the same time. 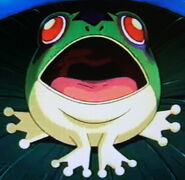 Kirby as he appears while possessed.

King Dedede as he appears while possessed.
Add a photo to this gallery
Retrieved from "https://kirby.fandom.com/wiki/Demon_Frog?oldid=148277"
Community content is available under CC-BY-SA unless otherwise noted.