Currency; can be spent on plays

Demo Tickets are a form of virtual currency used exclusively in the demo version of Kirby Battle Royale.

A Demo Ticket is an orange ticket with a yellow star image printed on it. The tickets are shown to have a reflective sheen.

Demo Tickets are required for the player to play the three game modes available in the demo, excluding the Apple Scramble match against a Soldier Waddle Dee in the introduction to Story Mode. Each day, the player is given five tickets for Single Player matches and seven tickets for Multiplayer ones, so he/she can only play 12 battles daily.

When the player spends a Demo Ticket, an animation plays where the ticket's stub is torn off. When all tickets from one category are used up, the image turns gray and the time remaining in the 24-hour period is displayed--when this timer expires, the tickets are replenished. Changing the time on the Nintendo 3DS's internal clock does not affect the ticket replenish rate. 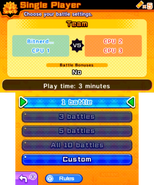 The player has five Demo Tickets, pictured in the upper-right corner. 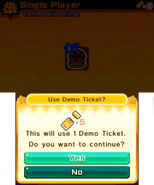 The player spends a Demo Ticket. 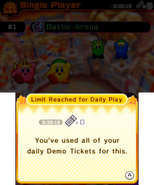 The player is alerted that he/she is out of Demo Tickets.
Add a photo to this gallery
Retrieved from "https://kirby.fandom.com/wiki/Demo_Ticket?oldid=310982"
Community content is available under CC-BY-SA unless otherwise noted.