Regular enemy
Degout is an enemy in the Kirby series, debuting in Kirby's Return to Dream Land. It cannot be inhaled.

Degout is a floating, robotic foe resembling a knight's helmet with a single glaring eye. In Kirby's Return to Dream Land and Kirby's Dream Collection Special Edition, its eye is orange. In Kirby: Triple Deluxe and Kirby: Planet Robobot, its eye is whiteish-tan. Some Degouts have a red tint and a red eye. These are Hunter Degouts, and hence their name, these Degouts hunt anyone carrying a key.

Like Mumbies and Scarfy from previous games, Degout only attacks Kirby when his back is turned. The main difference between this enemy and other un-inhalable enemies is Degout's tremendous amount of health. Degout has tough armor, so a strong Copy Ability is recommended for defeating it. The player must be careful when attacking a Degout, as it will follow him/her if it survives the first attack. There are also red Degouts that only attack when Kirby or one of his teammates is holding a key, much like a Hunter Scarfy. This hunter-like behaviour of theirs has given them the name "Hunter Degout".

This enemy appears on Halcandra and later appears on Planet Popstar in Extra Mode. Degout is first introduced in Egg Engines.

Degout returns in Endless Explosions. Unlike their Kirby's Return To Dream Land incarnation, these Degouts are more aggressive, always attacking Kirby and/or King Dedede. The Hunter variant does not return.

Degout returns in Rhythm Route. Its behavior has been reverted to how it acted in Kirby's Return to Dream Land. Red Degouts do not appear in this game.

A Hunter Degout in Kirby's Return to Dream Land 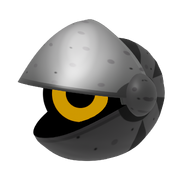 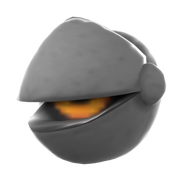