King Dedede bounces across drums at night while collecting Musical Coins. Indigo trees, a Ferris wheel, a castle, and various other structures decorate the background. The moon and clouds appear as cardboard cutouts suspended in the air by strings.

As an advanced stage, Dedede's Theme is designed to be more challenging than the previous stages. The tempo is faster, passing clouds hide coins or enemies, and collapsing drums appear--they break after two bounces, so the player should use them infrequently. Many enemies also inhabit the stage: Scarfys and Gordos hover in the air, Soarars swoop in and out of the foreground, and Swordorys routinely thrust themselves forward in a stabbing motion. Scarfys are most plentiful here; the king is expected to bounce through or over columns of them. The stage ends when Dedede reaches the Goal Drum and launches skyward.

The music that plays here is a rearrangement of "King Dedede's Theme," specifically the version from Kirby Super Star. The player is given two minutes to clear this stage. 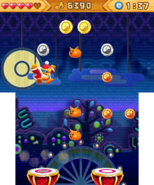