Dark Taranza is a boss in the Kirby series, debuting in Team Kirby Clash Deluxe. He is a counterpart of Taranza produced from the black mirror.

Dark Taranza looks similar to his counterpart, but he has features reminiscent of Queen Sectonia. His hair is curved and yellow, with two purple eyes on the front and four on the back of his head. Underneath his purple eyes at the front are two red, glowing eyes. He has a brown face with a mouth containing two fangs. He has two curved purple and black horns with yellow tips. He wears a purple cape with four yellow and black vertical stripes on it with a yellow ridge at the bottom. He wears a white collar with a purple gem in the center. His body is covered in yellow and purple stripes in a similar manner to a bee, and his stinger-like appendage on his bottom is silver and longer. He has six disembodied hands with purple and black gloves which have white sleeves and a yellow heart on them. Upon being smashed apart by King D-Mind, his entire body gains a metallic appearance right before shattering.

After being defeated in the Empyrean and subsequently summoning another boss to the Decisive Battlefield, Taranza comes out of hiding. As a last resort, he summons the black mirror and draws from it Dark Taranza. Team Kirby duels the evil creature, ultimately conquering him. He summons the king of darkness, King D-Mind, to vanquish them. When this villain emerges from the mirror, however, he promptly destroys Dark Taranza.

Team Kirby seals King D-Mind away in a far-off dimension and shatters the black mirror. It is revealed that Taranza was acting under the influence of the mirror for the entire game, and now that it is destroyed, he comes to his senses. Peace returns to the Dream Kingdom.

Dark Taranza is fought at the Decisive Battlefield in the penultimate quest of Team Kirby Clash Deluxe, called The Final Battle, which is unlocked for 180 Gem Apples. He is an Ordeal boss in the Tougher category and must be defeated before the player can access The True Final Battle. He attacks using all of Taranza's techniques and more, which are more powerful and meant to catch the player off-guard. These techniques primarily include firing magic projectiles; throwing a vast, bouncy, magical orb; firing jewels from the background; trapping the Kirbys in a net of energy; and covering himself in energy and rushing across the stage. Dark Taranza teleports frequently around the battle area to dodge attacks and assault Team Kirby from different angles.

Dark Taranza's name is supposed to indicate that he is a dark counterpart of Taranza, whose name is derived from tarantula. 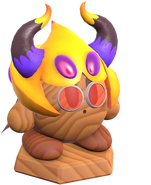 Super Kirby Clash (Weapon)
Add a photo to this gallery
Retrieved from "https://kirby.fandom.com/wiki/Dark_Taranza?oldid=331318"
Community content is available under CC-BY-SA unless otherwise noted.