Kirby Wiki
Register
Don't have an account?
Sign In
Advertisement
in: Enemies, Characters, Articles with uncited sources,
and 9 more
English

Dark Nebula is the final boss of Kirby: Squeak Squad. Having been sealed away in a Treasure Chest, it was accidentally unleashed upon the world by Daroach, who it took possession of.

At some point prior to the events of Kirby: Squeak Squad, Dark Nebula was sealed in a chest due to its evil power, and seemingly forgotten.

Through unknown circumstances, the chest was in possession of King Dedede at the beginning of the game itself, who was seemingly unaware of its contents.

However, Daroach somehow became aware of the chest's power and accosted it from King Dedede's castle, believing it to be the source of ultimate power[citation needed]. After being stolen by Meta Knight, who actually appeared to have an idea what was in the chest, and subsequently Kirby, who thought it contained his strawberry shortcake that had been stolen earlier, the chest was seized by Daroach, who promptly opened it. Daroach is quickly possessed by Dark Nebula and turned into Dark Daroach, and then flees with the Squeaks into the depths of Gamble Galaxy.

Kirby chased Dark Daroach and defeated him, expelling Dark Nebula in the form of a black star with two smaller stars in close orbit: Kirby, now toting the Triple Star that Daroach dropped, chases Dark Nebula still deeper into Gamble Galaxy until both arrive at a crystalline battlefield. Here, Dark Nebula begins gathering small and dark core stars, which assimilate into its being until he gains his true form, Dark Nebula is then fought. Once defeated, it begins disintegrating core star by core star, until the only thing left is an eye, which promptly explodes.

Dark Nebula's main form of attacking is launching stars at Kirby from an angle (usually the side of the arena). Dark Nebula also has three alternative forms. While changing forms, the screen will flash white. If Kirby bumps into Dark Nebula, he'll be damaged (burned, frozen or electrocuted depending on what form Dark Nebula has).

In its fire form, it can shoot stars that can burn Kirby. Its strongest attack in this form is releasing a large fireball that slowly approaches the ground and explodes, thus creating a vertical fire-blast. The easiest way to dodge this is to float by the side of the screen. The fireball can be destroyed by a Triple Star shot to cancel out the attack. On the sides of the blast are rows of lingering flames. Also in this form, it will move at great speeds in angles. This physical attack is hardest to dodge, but only when Kirby is floating in Dark Nebula's range.

In its thunder form, it will shoot stars at Kirby that can shock him. Its physical attack involves moving in a zigzag pattern. Its strongest attack is releasing four electric streams diagonally in all directions, then discharging them to create an electric frame that covers all sides of the arena. This attack is the hardest to dodge. The best way to dodge this is to first stand on the middle of the battlefield, wait for Dark Nebula's diagonal electric shocks to disappear, then, at the right moment, jump before Kirby gets hit by the electrical frame. It is also possible to duck under this attack, due to Kirby's small size.

In its ice form, it shoots out stars that can freeze Kirby. Its physical attack involves going around the arena in a circle. Occasionally while doing this, it will float back and forth across the stage in an arc. Its special attack is firing an ice laser at the ground, thus freezing it. This hinders Kirby's traction so that Dark Nebula's attacks can't be dodged as easily.

Dark Nebula is named after a type of interstellar cloud of the same name. 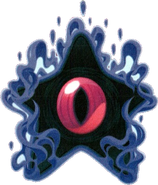 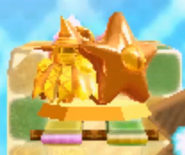