Kirby Wiki
Register
Don't have an account?
Sign In
Advertisement
in: Enemies, Characters, Articles with speculation,
and 12 more
English

Final Boss
Dark Mind is an evil entity that serves as the main antagonist and final boss of Kirby & The Amazing Mirror.

In his first form, he looks very similar to Nightmare. He wears some sort of crown, with his true face residing under it. He has blue-gray disembodied hands with his fingers having sharp nails on them. He has a dark blue aura around him that he "wears" like a cloak. Whenever his hands aren't crossed, his orange core is revealed. Dark Mind's design in this form seems to be heavily influenced by the armor worn by traditional samurai.

Dark Mind's second form appears as a large, fiery orange ball with an eyeball and a red gaseous aura. His sclera is black, and his iris is gold with a red pupil.

Dark Mind's first form has two mirrors orbiting him and a core below his cloak. His main attack in this form is firing a large number of stars in wave or stream formations or constantly teleporting around.

Dark Mind is fought more than once, and as phases go on, he becomes more erratic and he gains new attacks, such as dropping stars in corners that later home in on Kirby, swinging his mirrors around in a circular pattern, shattering into glass if attacked when his core is not exposed, and dropping large bombs whose explosions reach the whole screen if not promptly destroyed. The stars can be inhaled for Fire (red), Ice (blue), Spark (violet), or a random ability (green), and the bomb will give Crash if Super Inhaled.

Dark Mind will open his cloak for all his attacks: although Dark Mind is always vulnerable, he will take much more damage, stop whatever he is doing, and retreat if he is attacked with his cloak opened. Defeating Dark Mind in the first three battles will cause him to shatter (similarly to Dark Meta Knight), but the fourth defeat will cause him to explode violently and glow white as his cloak vanishes. While Master is not needed to damage Dark Mind, it will not start the fight until Kirby grabs it.

After each of the first three battles, Kirby is placed in a rest area, usually with a few enemies. There are usually several pieces of food in each area for Kirby to restore health if damaged while fighting Dark Mind.

In Boss Endurance, this form is only fought once, and is capable of using all attacks.

The second form is the most important battle against Dark Mind; he starts out as a giant ball with a vertical-slit eye and grows enormous in a red, gaseous area; if Kirby does not have Master, Shadow Kirby will run into battle and throw it to him. Dark Mind uses a variety of attacks, many of which involve his mirrors (which are themselves vulnerable to damage now).

One attack has Dark Mind slowly floating down the screen with the mirrors moving in a lemniscate pattern around him, circling them around in various directions (e.g the ground, mid-air or moving alongside them). After performing this attack, he will have two additional follow-up attacks. The first one aligns the mirrors in the corners of the stage, where he fires a single laser shot which can reflect in different directions, though the mirrors may also follow to reflect the laser at Kirby. Alternatively, the mirrors will crisscross the stage before one of them drops three random enemies (UFOs being the rarest) onto the ground.

Sometimes Dark Mind will prepare a large beam from his eye and fire it in various ways: in bursts at set locations, bursts aimed at the player, or a long-lasting beam that he sweeps across part of the arena. He is also capable of flipping the screen upside down, potentially disorienting the player, though the input buttons work as normal. He is also capable of dropping the screen-engulfing bomb that he used in the previous phase.

Damaging Dark Mind can be done either by attacking his eye (which is relatively easy to hit but doesn't do much damage) or destroying the mirrors (which does much more damage and interrupts whatever he was doing, but is more difficult and made risky by the fact that the mirrors turn into cutters upon their destruction and reform shortly afterward). After all his health is depleted, Dark Mind shuts his eye and starts to shrink.

Now in a smaller, unstable, fireball-like form, Dark Mind retreats into the sky, pursued by the Kirby(s) (now riding Warp Stars). Dark Mind acts much like Nightmare's Power Orb, shooting out barrages of stars from his eye and trying to ram Kirby: he also must be defeated the same way (namely, by shooting a lot of stars at him). Depleting his health will start both his explosion and the credits, but not put an end to the battle, with Dark Mind still trying to attack Kirby but not being able to do any damage: the Kirbys can shoot him and earn points for doing so until he drifts to the center of the screen, where, after several seconds he finally explodes, putting an end to his plan of ruling the Mirror World. It is learned after Dark Mind is defeated that he intended to make the Mirror World be overrun with a person's worst reflection of themselves.

Outside of Boss Endurance, a tally is kept of how many times the Kirbys have hit Dark Mind after his health is depleted, and adds 30 to that number when he finally explodes.

Dark Mind appears as a cameo in the form of a helmet for Hammer Lord. His mirrors appear on the weapon itself.

Dark Mind appears as an Ace-class support spirit in Super Smash Bros. Ultimate. When applied to a fighter, the fighter will start a battle with a Franklin Badge equipped. 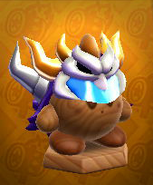 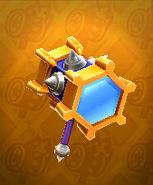