Kirby Wiki
Register
Don't have an account?
Sign In
Advertisement
in: Enemies, Characters, Articles with non-canonical information,
and 22 more
English

Dark Matter, after being purged from King Dedede in Dark Castle, appears as a black sphere with a single eye, as well as spiky hair. When the battle commences, he now wears a cloak, a mask, and wields a sword. This form is dubbed Dark Matter Blade in the North American version of Kirby: Planet Robobot’s The True Arena. After being defeated, Dark Matter transforms into Real Dark Matter, which resembles a black sphere adorned with ten purple petal-like appendages, and a single eye in his center. In his appearances in other games, Dark Matter appears in his Real Dark Matter form, but his appendages are orange and spherical, and the amount varies between eight, ten, or twelve of them.

Dark Matter has had cameo appearances across the Kirby series, but he returned in Kirby: Planet Robobot as Dark Matter Clone.

Dark Matter first confronts Kirby as Dark Matter Blade. He attacks by dashing forward trying to stab Kirby, firing energy beams from his sword, and by launching dark energy orbs. Although Kirby can deal minor damage (a fifth of a health point) to Dark Matter Blade by slicing his body with the Rainbow Sword itself, Kirby can more significantly deplete his health by deflecting the energy orbs back at him. When defeated, Dark Matter Blade transforms into Real Dark Matter, and Kirby must fight him again while slowly sinking toward Popstar. This time he attacks in a pattern, first releasing four of his purple appendages at Kirby twice in a row, then shooting dark beams in a circular motion twice more, then launching himself forward three times, and finally shooting two Dark Lasers from his eye three times. To ultimately defeat Real Dark Matter, Kirby has to repeatedly slash its appendages back at him during his first attack, similar to the Dark Matter Blade battle, and then damage him directly with the Rainbow Sword during the rest of his attacks. If Real Dark Matter is not dispatched quickly enough, Kirby will reenter the atmosphere and begin taking a single point of damage at regular intervals, eventually resulting in a life lost similar to the battle with Nightmare's orb form in Kirby's Adventure and its remake. If Kirby loses a life against Real Dark Matter, but has lives to spare, he will have to fight Dark Matter Blade again.

After his defeat, Dark Matter was obliterated. Kirby's Animal Friends and even an awakened King Dedede celebrated as their benefactor rides his Rainbow Sword through the air. With one last wave of the sword, Kirby restores the islands' rainbows and reverses Dark Matter's plans.

In Kirby's Dream Land 3, a mysterious giant cloud breaks through the rings of Planet Popstar to get to the surface, and its long reaches possess King Dedede again as well as Whispy Woods, Acro, Pon & Con and Ado far off the land. Dedede is once again bound to an unnatural sleep. Obtaining all the Heart Stars of an area will relieve that level's boss of possession upon defeat. If Kirby collects all the Heart Stars and saves all the boss characters, he will use the Love-Love Stick to reach the black cloud (and may be accompanied by Gooey), where Dark Matter will re-form and attack. Dark Matter retains his appendage attack, which is modified to have the orange orbs home in on Kirby (though they can be destroyed with the Love-Love Stick). Like the previous encounter, Dark Matter can also shoot Dark Lasers out of his eye; he will shoot a bolt of lightning in one direction, then another, then a third, and finally a fourth.

After defeating Dark Matter, he is once again banished and Kirby comes face to face with Zero, the true main antagonist.

During the battle against Adeleine, a representation of Real Dark Matter appears as one of her paintings. His only attacks involve dropping down orange projectiles when above Kirby, or flying around in an ellipse in an attempt to ram Kirby.

Dark Matter Blade makes a cameo along with other final bosses in a graphic, which Kirby can assemble by collecting Graphic Pieces from Treasure Chests.

Dark Matter Blade appears in one of the cards in the Card Swipe sub-game.

Dark Matter appears in Kirby Mass Attack as the final boss of the Kirby Quest mode. He has both his Dark Matter Blade and Real Dark Matter forms. If Kirby picked up Galaxia, it is super effective to both forms, possibly in reference to his original weakness to the Rainbow Sword.

A clone of Dark Matter, usually referred to as Dark Matter Clone, appears to do battle against Meta Knight to test him during the Meta Knightmare Returns sub-game. The clone takes the form of Dark Matter Blade; due to Star Dream's inability to analyze the alien life-form correctly, his true form only appears inside Dark Matter's cloak and the last moment of his demise.

He will initially fight similarly to Dark Matter Blade, staying at a side of the arena, and shooting dark energy at the player. Soon, he will move to the background to fire larger energy balls, which can be launched back at him. He will occasionally also dash towards the screen with a dive attack.

Once Dark Matter loses half of his health, his eye will temporarily withdraw to the main body to let out a roar before changing color to red. At this stage, Dark Matter will now utilize moves from his true form; he will first move to a side of the screen while the eye fires Dark Lasers around the arena. Afterwards, he will summon four orange spheres around himself which Kirby can swallow to get the Fire ability, and he will circle the arena briefly before ordering the spheres to attack the player. Dark Matter will then head to the background before performing three multi-slash attacks.

Dark Matter Blade appears alongside many other final bosses in the "Bad Boss Brothers" Celebration Picture.

In Kirby of the Stars Pilot

Dark Matter in his appearance from Kirby's Dream Land 3 appears in the Kirby of the Stars Pilot as one of the enemies created out of the plumes of smoke when the sky went dark. Kirby freezes him with the Ice ability after he inhales Ice Dragon.

Dark Matter Blade appears as a primary, Legend-class attack Spirit, providing three slots for Support Spirits in Super Smash Bros. Ultimate. It sports no effect when applied to a fighter, but also has one of the highest power levels in the game.

His Spirit Battle is a stamina battle against King Dedede in his black and white coloration, before fighting Meta Knight in his navy blue coloration, referencing the battle with Dedede followed by Dark Matter Blade in Kirby's Dream Land 2. 0²'s battle theme plays, and the battle is fought on the Halberd stage's Ω form, while Nightmare frequently appears to obstruct the player's vision, both likely referencing the darkness theme. King Dedede and Meta Knight can also randomly get critical hits, and their weapons have increased strength.

Dark Matter's appearances in Kirby's Dream Land 2, and Kirby's Dream Land 3 are canon. His appearance in Kirby Mass Attack’s Kirby Quest sub-game is non-canon, as it is not part of the main story. Meta Knight's battle against his clone in Meta Knightmare Returns is also non-canon, however, Star Dream's data analysis of him is ambiguous; it is possible that it just wasn't used to fight anyone, and as Star Dream was defeated, that information that would be used to create the clone would probably disappear with it. Star Dream's data on Dark Matter may indicate there are still traces of the entity left somewhere out there.

His appearance in the pilot is also non-canon, as the pilot is not directly connected to the anime series, Kirby: Right Back at Ya!. 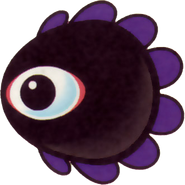 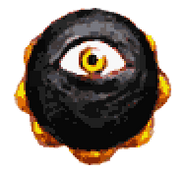 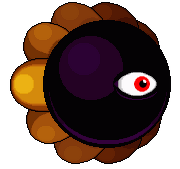 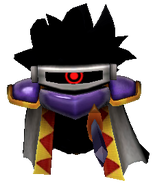 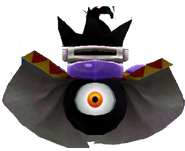 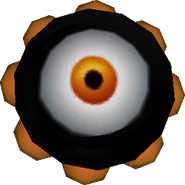