Danglerfish are rare enemies appearing in the game Kirby's Epic Yarn and its remake, Kirby's Extra Epic Yarn. They only appear in the Deep-Dive Deep stage.

Danglerfish look like giant purple anglerfish with a purple illicium and a glowing yarn ball at the end. They have gray teeth, purple fins, and a green tail fin. Danglerfish have two purple and yellow button eyes.

Danglerfish's name is a portmanteau of dangle (referring to its illicium) and anglerfish.

Its Japanese name アンドーラ (Andōra) may be a portmanteau of 行灯/あんどん/あんどう (andon/andō), a kind of paper-covered oil lantern, アンコウ (ankō), the word for anglerfish, angora (a type of wool) and angler. 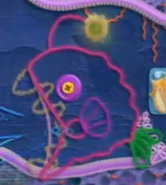