Dacooga is an enemy in the Kirby series, debuting in Kirby Super Star. It yields the Poison ability when inhaled.

Dacooga appears inside Galactic Nova with Pata and Volm enemies. It homes in on Kirby's Starship and tries to crash into the hero. Dacoogas often appear in groups. The enemy explodes when hit with one shot.

When Kirby enters Star Dream Soul OS, the Mother Computer's heart fires Patas, Dacoogas, and Volms. They explode on impact. This is the only game in the series in which Kirby can inhale Dacooga. 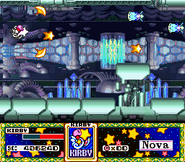 Kirby Super Star Ultra
Add a photo to this gallery
Retrieved from "https://kirby.fandom.com/wiki/Dacooga?oldid=321481"
Community content is available under CC-BY-SA unless otherwise noted.