Yellow cap with eyes and wings. Resembles a Duck. The blade is stored on the hat when not in use.

Cutter is One of Kirby's Copy abilities. It is commonly regarded as the main projectile-based ability in the series.

Kirby gains the ability to utilize a curved blade. When thrown, it will always return to him in the fashion of a boomerang. If Kirby jumps over the cutter on its return, it will go beyond him and go off-screen (and also cleave any enemies that happen to be be behind him). In later games, the Cutter's blade has become more controllable since Kirby can guide the blade either upwards or downwards.

The Cutter hat somewhat resembles a duck- it's a yellow hat with a bill that's either yellow or white, and two black eyes that look like Kirby's own. Two tiny white wings are on the side, and Kirby keeps the cutter blade attached to the top of the hat when not in use. However, in Kirby 64, the "blade" Kirby uses is actually his own face, which peels off his body and travels foward.

Kirby uses the Final Cutter as his Up Special in all three Super Smash Bros.. Instead of being used as a combo it's all one manuver, Kirby brandishes a Cutter, jumps up, then comes back down, creating a Cutter Beam on landing. This version of the attack is sometimes used by Sword.

Cutter Kirby uses the same duck hat as the later games, and appears whenever Kirby manages to inhale things like blades and saws (anything that's sharp except for an actual sword, it seems.) It is revealed here that the Cutter that Kirby uses is stored on the hat when it isn't in use. In the transformation sequence, Kirby's hat spins on his head and the boomerang flies around until it hits his hat.This version of Cutter is based on the KSS version, but with new attacks. Cutter Boomerang is the primary attack, but Kirby often uses Cutter Finish or Final Cutter to finish off enemies.

It also gains a new ability- Cutter Beam, where Kirby spins rapidly and fires a thin beam of energy to slice long distances away. 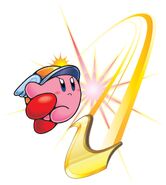 Kirby: Nightmare in Dream Land
Add a photo to this gallery
Retrieved from "https://kirby.fandom.com/wiki/Cutter?oldid=74870"
Community content is available under CC-BY-SA unless otherwise noted.