As its name suggests, almost the entire area is made of crystals, gems, etc. The area splits into three paths after the Save Cottage, although only the right door goes anywhere. The left door goes to an area that resembles a crystal wall, with Kirby climbing the outsides. The center door leads to a water-filled cavern. The right door leads to a cavern made of yellow crystal.

Some Copy Abilities can only be found via Copy Essence if Kirby attempts to battle Computer Virus without a Copy Ability. 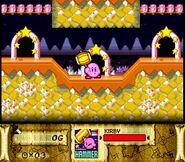