Crash[1] is an item in the Kirby series, debuting in Kirby's Block Ball.

The item can be dropped by Kookler, Bounder, Bomber, Blasto and Scarfy, making it the second-most common item in the game. Crash is introduced in Stage 6. When collected, the item will cause an explosion around Kirby which destroys all colored blocks (which are otherwise impossible to destroy) in the level. If left untouched for a few seconds, the item will disappear. 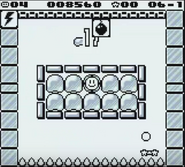 Retrieved from "https://kirby.fandom.com/wiki/Crash_(item)?oldid=334700"
Community content is available under CC-BY-SA unless otherwise noted.