When held, it fires arcing shots automatically to a fixed distance ahead of the carrier for as long as it lasts. If the carrier crouches, the shots won't be fired as far. The Crackler turns dark red and the star on it begins to flash once it has come to close to firing its set amount of shots. Once it has exhausted its ammunition, the character can throw it away, and it will explode on impact with anything.

It is an orange-colored device with a large, cylindrical body and a flared opening where the shots are fired from. The star decoration on the body is yellow in Kirby Air Ride, and changes color in Kirby's Return to Dream Land depending on the state of the Crackler; blue when new and red when expired.

It is available in City Trial mode and in the Destruction Derby arenas as a randomly spawning power-up. It can only be picked up while on an Air Ride Machine.

The Crackler has the ability to destroy Metal Blocks. Characters holding it cannot float or fly, and will drop it if they are injured. It has its own segment as part of the Item Challenge.

The Crackler reappears in Kirby: Triple Deluxe. Items such as the Crackler can be found in Blue Boxes in the Kirby Fighters sub-game (as well as the downloadable Kirby Fighters Deluxe). An item called the 3D Helmet Cannon appears in the main game, which fires cannonballs into the background (or foreground) instead of forward. 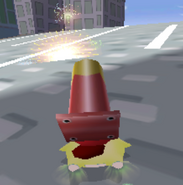