Crack-Tweet is a yellow chick with an orange beak, Kirby-like eyes, and three strands of hair on its head. It is often hidden inside an egg.

In the top stage of Poppy Brothers' Land, three Crack-Tweet eggs sit in the middle of the stage. Three Poppy Bros. Jrs. wander out of doorways in the ceiling toward the eggs. Kirby's goal is to hit each egg four times, and thus break all the Crack-Tweets out of them. If a Poppy Bros. Jr. reaches an egg, he'll replace it with a new, undamaged one and scurry back to his door. Kirby can send these enemies back through their doors by hitting them before they cause trouble.

Once all the Crack-Tweets are free, they enter the doorways. They quickly rush back out with an apple, bomb, and black Warp Star in tow. They flee back into the doorways and start the cycle all over again if Kirby doesn't act fast. Touching the Warp Star takes Kirby to the boss, Poppy Bros. Sr. If Kirby has beaten King Dedede at least once when he breaks out all the Crack-Tweets, the sound of the microphone item from Kirby's Dream Land sounds and a sprite of Axe Knight appears where the middle egg was.

Crack-Tweet hops around inside its egg. The eggshell can be destroyed in a number ways: It can be Inhaled, attacked with the Star Spit technique, or hit with a Copy Ability. The egg can even break if it falls from a great height. When the enemy hatches, it flies towards Kirby in an attempt to hit him.

This is the only game in which Crack-Tweet and its egg can be Inhaled, as the other games it appears in are spin-offs.

Crack-Tweet appears as an enemy in Stage 9. It flies back and forth and drops food when defeated.

Crack-Tweet appears in Kirby's Toy Box - Pinball. Its egg sits in the upper left-hand corner of the board. Each time Kirby passes over it, it cracks more. After four passes, the egg completely breaks and Crack-Tweet flees off the left side of the screen. The egg then returns, allowing Kirby to break it all over again.

Crack-Tweet's name likely comes from the fact that its cracked eggshell forces it to attack, and "tweet," the sound most small birds make. 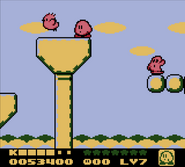 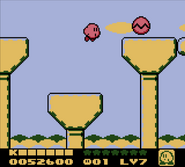 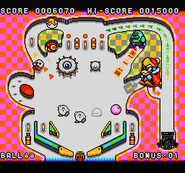 Kirby's Toy Box
Add a photo to this gallery

Kirby's Toy Box
Add a photo to this gallery
Retrieved from "https://kirby.fandom.com/wiki/Crack-Tweet?oldid=318586"
Community content is available under CC-BY-SA unless otherwise noted.