Regular enemy
Craby is an aquatic enemy in Kirby's Return to Dream Land and Kirby: Triple Deluxe. Craby looks and acts much like Kany. When Kirby and his teammates go near this enemy, it reaches out to them and tries to pinch them, hurting the heroes. If Kirby has a Copy Ability when he's hit, he'll automatically drop it. Craby appears both on land and in the water.

Craby is a short, light blue blob resembling a crab with nubby legs and two purple claws with red tips on the sides of its head. It has two large eyes with black pupils. In Kirby: Triple Deluxe, Craby had a slight redesign, with having a more reflective body. Its body is lighter and its claws are darker. Its eyes have highlights and blue irises. 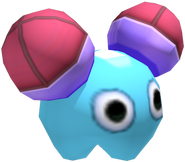