I wish I knew why Phan Phan's so frightened all the time. I've never seen a monster act like this before.Tiff

Cowardly Creature is the ninety-sixth (ninety-fourth in Japan) episode of Kirby: Right Back at Ya!. It is known for the first appearance of Phan Phan in the anime, as well as the appearance of many other characters, mainly including Whippy and his colleagues at the Monster School. It is also the episode featuring the only appearance of the Throw Copy Ability.

A monster from Nightmare Enterprises escapes, and after unintentionally destroying half of Cappy Town, King Dedede wishes to punish him. However, Kirby knows that the monster had no intention of harm, and was just scared.

The episode starts with King Dedede running away from a giant, heavily clown inspired monster with red glowing eyes in slow motion in a very surreal landscape. However, he begins to grow tired from running and slows down, allowing the monster to smash him with his elephant-like foot. But it turns out it was just a dream, and Dedede wakes up screaming and runs out to Escargoon's bedroom, and proceeds to whack him on the head with his hammer, waking him up (but not without a towering lump on his head). Dedede screams at Escargoon saying that he had a nightmare, when suddenly they both hear the NME teleporter start up without either of them touching it.

They run to Dedede's throne room to see what's going on, but nothing's there. So, they walk back down the hallway, when suddenly, the monster from Dedede's nightmare comes crashing through the castle walls.

Meanwhile, Chef Kawasaki is taking out the trash when he trips over an elephant's tail. Upon regaining his balance, he looks up to see the monster from Dedede's dream, but this time we get a much more detailed look at him, as he looks less demonic and much more like an elephant. Kawasaki screams and drops the trash can on his tail, freaking him out and causing him to crash into Kawasaki's restaurant. The monster proceeds to crash through the buildings of Cappy Town. Meanwhile, Tokkori has travelled to Tiff and Tuff to tell them about the monster. They decide to go and warn the rest of the Cappies, so they go on their way, and they are joined by Kirby.

Back at Castle Dedede, Dedede and Escargoon receive a call from Customer Service. He tells them that a monster from their "Young Monsters of the Future Program" has escaped, likely because someone has hacked into their computer system and set one of them free. He also says that the one that escaped is named "Phan Phan". Upon hearing this, King Dedede goes to Cappy Town to find Phan Phan.

Back at Tiff, Tuff, and Kirby, they arrive at Cappy Town to see the damage, and they also find the monster's footprints. Chief Bookem suspects that Dedede is behind this whole event, and Tuff agrees with the suspiscion. Just as they are speaking about him, Dedede comes in along with Escargoon. He confirms that he had nothing to do with the monster, and that he's going to drive the creature out of town himself. The Cappies are surprised, of course, since King Dedede generally dislikes the Cappies, and doesn't help them at all. Suddenly, the monster crashes in, and King Dedede concludes that the monster is indeed the escapee Phan Phan.

King Dedede proceeds to hit Phan Phan until his clown accessories fly off, revealing himself to look less like a monster and more like a cute elephant. Dedede pauses for a second, while Phan Phan whimpers, extremely frightened. But Dedede believes he's just pulling on an act and chases him down the streets. The reactions from the Cappies about Dedede doing this to Phan Phan so far are mixed, some are cheering for Dedede, and others are having second thoughts about the act, due to the extreme distress Phan Phan has shown to be in.

Some of the Cappies then rush in and corner Phan Phan, allowing Dedede to pummel him. However, Kirby knows that Phan Phan was just scared and doesn't deserve such treatment, so he rushes in to stop Dedede and Escargoon. Dedede ignores Kirby as he prepare to hit both Kirby and Phan Phan. Angered, Kirby inhales Dedede's hammer and Escargoon becomes fearful that he'll turn into Hammer Kirby. However, instead of that Kirby spits it back at Dedede and Escargoon, causing them to fly away into the forest. The duo aren't hurt however, and they still believe that Phan Phan is really an evil monster, and still want to defeat him.

The next day, Kirby, Tiff, Tuff, Tokkori, and three other cappies that are friends of Tuff show Phan Phan Kirby's house. But even after Kirby saved him, he's still scared of him. No matter what Kirby does to try to prove that he will be nice to Phan Phan, he's still scared. After some failed attempts of Kirby trying to be friendly to Phan Phan, he gives Phan Phan an apple to munch on, and finally, he accepts the friendship.

Back at King Dedede and Escargoon, they return to Castle Dedede and order a monster from Nightmare Enterprises to combat Phan Phan. The monster they get is Whippy, a clown monster with a whip as a weapon. To demonstrate his abilities, Whippy proceeds to round up Escargoon with his whip, and drag him forward. King Dedede is impressed, and sends him to work.

Meanwhile, Kirby, Phan Phan and the others are playing in the lake, and Phan Phan uses his trunk as a slide into the lake for them, and after everyone's done with him, jumps into the lake himself, causing a giant splash that sends everyone flying and then land on his head. Everything is fine until King Dedede and Escargoon come in, and call out Whippy to attack Phan Phan. He uses his whip to drag in Phan Phan by his trunk and out of the lake. Whippy then proceeds to use his powers to possess Phan Phan, and Dedede and Escargoon laugh at the creature's - and Kirby's - misfortune. Phan Phan then chases Kirby while Whippy rides atop his head, and Kirby leads him straight into Cappy Town. Whippy hands Phan Phan a spiked ball to harm Kirby with. Phan Phan hits Kirby once, but he gets back up, and Phan Phan chases him.

Kirby gets hit three times (third by his trunk), and Kirby seems to have given up, until Meta Knight suddenly appears. He tells Kirby to use the weapon against him, and Kirby does just that, he inhales the spiked ball, and becomes Throw Kirby to face Whippy.

Kirby gets spiked balls thrown at him but he dodges, though he is then grabbed by Whippy's weapon and bounced around, until Kirby manages to escape his grasp, drag him forward by sucking, and then throw him around, making him bounce like a beach ball. Kirby finishes by throwing Whippy up into the air with so much force that he flies into a black hole far away in space. With Whippy defeated, Phan Phan turns back to normal. King Dedede and Escargoon run away, only to be hit by one last spiked ball thrown by Phan Phan. The episode ends with Phan Phan being accepted as a new member of Cappy Town. 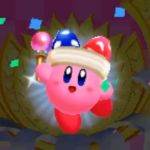 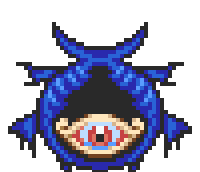