Regular Enemy
Corori is an enemy in the Kirby series, debuting in Kirby's Dream Land 3.

Corori is a small purple penguin roughly the same size as Kirby. Despite his small stature, Corori is able to push around massive snowballs with his stout little flippers. He has small, beady black eyes, a white stomach, and wears a knitted orange hat with a white pompom on top and small orange feet.

Corori is found in cold environments. When he spots Kirby, he pushes down a large snowball about twice the size of Kirby. Usually, Corori stands perched at the top of a hill or a steep incline, making it easier to roll his snowball down. Although Corori is found exclusively in ice areas and attacks by rolling snowballs at Kirby, Corori does not give Ice.

Corori once again appears in cold environments and attacks by rolling large snowballs at Kirby. When attacked, its feet are shown for the first time. 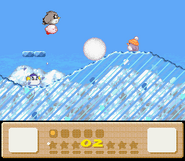 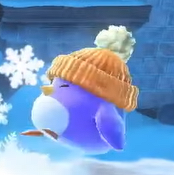