Kirby starts out on a flat plain. After running up and down a small hill, the player will encounter a small ledge and a shallow ditch, both of which they must jump over. From here, the player will run up a small hill like before, but then they will descend it all the way down into an underground area, where the path levels off again. Jumping up two stars, the player will find a corridor where they can either jump along the top platforms or run on the ground, avoiding the hilly terrain. Past a high cliff that they must fly over, the player will need to jump carefully to traverse the two small ledges in this corridor. At the end of the hallway, as there is a wall to the right, the player must jump up and continue through the hallway to the left; after that, the player jump up again, and this time continue through a hallway to the right that passes over the previous wall. After dropping down three stairs, the player can choose which way to go. The first path is up the nearby ladder, where the player can either run along the hilly ground and jump to the cliff on the right, or run along the platform on top that leads directly to the cliff. The other path is simply to continue right past the ladder, where the player must pass two small ledges, break through a 2 by 2 square of Star Blocks, and then fly up the cliff, rejoining the other path. After running up a small hill, Kirby will cross the finish line. 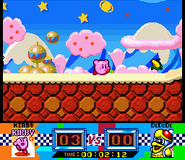