Copy Essences are fairly common. A certain number of them are almost always found before a boss fight (and, in rarer cases, a mid-boss fight), and the selection of abilities they give is usually fairly useful against the specific boss. Before the introduction of the Copy Essences, Copy Abilities are similarly presented before boss fights in the form of regular enemies completely enclosed within the ground, but this is rather unrealistic, and the enemies are not as harmless as the Essences, as certain ones can hit outside the barrier they are encased in. Also, if Kirby inhales the wrong enemy, they have to be respawned by moving off-screen, which is sometimes impossible to do without triggering the boss fight.

Instead of Kirby having to face the boss without any Copy Ability or having an unsuitable one which is better off used performing the Star Spit, it is usually better off to grab an ability from one of the pedestals unless the player is using special or universal abilities, or that the ability has uses elsewhere, like Master, Smash, Triple Star, Hammer, UFO or even Plasma.

The Copy Essence replenishes itself after being used after Kirby no longer touches it, which makes it particularly useful for experimenting with Copy Abilities or the creation of specific Helpers in Kirby Super Star and Kirby Super Star Ultra. Due to their very nature, the Copy Essences cannot be used to perform Mix, however.

With the Sleep Essence in particular, Copy Essences can become a nuisance, as moving over one causes Kirby to discard his current ability (except in Kirby & The Amazing Mirror), whatever it may be. In The Great Cave Offensive, there is a particular sequence with a large number of Sleep Essences which Kirby must navigate while braving strong winds to get at a Treasure Chest inside the Old Tower Area. There are other puzzles throughout the series that involve avoiding the Sleep Copy Essence as well. A.I.-controlled Helpers are also sometimes prone to moving over Essences and changing their form to one less suitable for an upcoming battle.

In some games, an Ability Testing Area containing many, if not all, of the Copy Abilities in that game can be unlocked. In such rooms, Kirby uses Copy Essences to obtain the ability he wants.

In the Milky Way Wishes sub-game of Kirby Super Star and Kirby Super Star Ultra, there are no traditional Copy Essences available (except during the Computer Virus boss fight) and Kirby can only copy rarely-available limited-use Copy Abilities by means of his inhale. Nineteen Copy Essences Deluxe are hidden throughout the levels, and upon touching one of these, Kirby gains the use of the Copy Ability permanently within the context of Milky Way Wishes, able to swap in and out of all such Deluxe abilities at any time.

Kirby of the Stars: The Great Bandit Daroach Gang Appears! 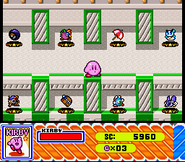 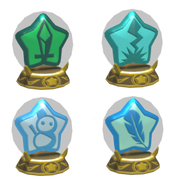