Copy Abilities (called special abilities, enemy's ability,[1] or Special Powers[2][3]) are powers that Kirby and other members of his species can gain in various ways during gameplay. They have appeared in all of his games since Kirby's Adventure (excluding most spin-offs). They have been a staple feature of the Kirby franchise ever since their introduction.

Kirby's friend Gooey has been shown to be able to use Copy Abilities by swallowing enemies.

The main way that Kirby gets his abilities are from inhaling and swallowing certain enemies, mid-bosses, weapons or objects (hence the name, "Copy Ability"). However, an ability won't necessarily have all the attacks that an enemy can perform. For instance, Bonkers (a mid-boss), can throw explosive coconuts, but the ability he grants, Hammer, doesn't allow Kirby to throw coconuts. Conversely, sometimes Kirby can do moves that the enemy cannot. Some enemies are ability-neutral, meaning they do not yield powers.

Originally, in Kirby's Adventure and games following it, a Copy Ability would give Kirby one move, with perhaps options for charging or aiming. In Kirby Super Star, however, many Copy Abilities allowed a wider arsenal of moves. Following Kirby Super Star through Kirby: Squeak Squad, this was temporarily dropped, so some abilities, like Beam, retained the traditional one move per ability, while others, such as Fighter, still offer multiple moves to be performed. Since Kirby's Return To Dream Land, however, Copy Abilities have become far more dynamic, expanding on the concepts of Kirby Super Star by allowing a variety of moves for each Copy Ability. This variety has even allowed for a full fighting game based mostly on abilities' movesets to be released.

In Kirby's Dream Land 2 and Kirby's Dream Land 3, there were less than ten abilities, each with one move only. However, there were also animal allies. Each ability had unique effects while Kirby was riding an ally. For instance, Burning normally makes Kirby zoom forward, surrounded by fire, but when Kirby is on Rick the Hamster, Rick breathes fire instead. In Kirby 64: The Crystal Shards, Kirby could mix six of the abilities from Kirby's Dream Land 2 (along with one ability introduced in Kirby Super Star) together to create ability combos. This concept returned in Kirby Star Allies, where elements could be combined with abilities and Friends to create a wide variety of possible special moves and combinations.

If Kirby swallows two or more enemies that can grant Copy Abilities at once, Mixing starts, and Kirby gets the opportunity to randomly select an ability in a roulette before it lands on a pre-determined or random one. In Kirby 64: The Crystal Shards, Kirby: Squeak Squad and Kirby Star Allies, certain Copy Abilities, when combined, will yield certain other abilities (i.e. in Kirby: Squeak Squad, Sleep + Sleep = Ghost).

In Kirby Super Star and its remake, Kirby can receive non-ability effects from the roulette, including "Ouch" (which causes Kirby to take damage) and "Invincible" (which prevents Kirby from taking damage for a short time).

Mid-bosses can't be inhaled until they have been defeated. After being defeated, they will lie on the ground for a few seconds before exploding. During this time, Kirby can inhale them and gain their abilities. With some Copy Abilities, such as Suplex, Backdrop, Artist, Ghost, Smash Bros., and Magic, there are no normal enemies to get the power from. Only mid-bosses carry such powers.

Copy Abilities, in some games, appear on small pedestals, where they can be obtained when touched. On top of the pedestal is an icon representing the enemy/mid-boss that is usually seen giving Kirby the ability. These pedestals are called Copy Essences.

In the Kirby Super Star / Kirby Super Star Ultra sub-game Milky Way Wishes, Kirby cannot gain abilities from swallowing enemies. Instead, there are collectible items that are known as the Copy Essences Deluxe, that allow Kirby and his helper to switch to that ability at any time once it's collected.

If Kirby is hit by an enemy or an environmental hazard, the ability will automatically be turned into an Ability Star that will erratically bounce for some time until it disappears. Kirby can inhale and swallow the Ability Star to regain its ability before it disappears. In some games, Kirby loses his ability after taking one hit, but in most games, Kirby must be hit with multiple or very strong attacks before dropping his ability. In Kirby: Squeak Squad, if Kirby ducks when being hit, the damage he takes won't be reduced but he will not lose his ability. Enemies such as Droppy or Tac are notable for being able to steal Kirby's Copy Ability, absorbing it without the ability becoming an Ability Star.

Ability Stars are vulnerable to being lost while bouncing in a variety of ways. If the Ability Star touches spikes, magma, or an electrified field from the environment, it will disappear. In most games, if it touches water, it will sink and quickly break (though in Kirby & The Amazing Mirror and Kirby: Squeak Squad, ability stars are buoyant and appear to be waterproof). It will also disappear if it falls down a pit. If Kirby gains another ability while his previous one is a bouncing star, it will quickly disappear.

In all games through Kirby Super Star Ultra, Ability Stars are uniformly yellow. However, starting from Kirby's Return to Dream Land, every Ability Star has its own unique coloration and symbol on it, allowing the player to easily tell which ability it is. Kirby (or a teammate) can also usually carry these Ability Stars is if one lands on top of him.

All of these properties apply to regular abilities. However, if Kirby drops or loses the Master or Triple Star, it will be discarded by bouncing away (though not in the form of a star), and will not disappear after any amount of time, by touching spikes/water/magma/electrified fields, or by getting a new ability, though it will still disappear if it falls down a pit and float to the surface of water.

Some abilities are exceptionally powerful, but Kirby loses them after using their ability once (except for Mike, which can be used three times).

In Kirby Super Star, Kirby can't create a helper with this type of ability. These abilities are the only Copy Abilities that can be obtained by swallowing enemies in the Milky Way Wishes sub-game, but, as a drawback, do not have a Deluxe version and are rarely seen (with the possible exception of Sleep). (Crash, however, can be seen as an exception as this can also be procured by using Copy on a Scarfy.)

In Kirby: Squeak Squad, the Magic ability's Ability Scroll move causes it to forfeit the ability, like in previous games. If that attack isn't used, the ability can be used like any other normal power.

In older games, Kirby would flash periodically whenever he had a limited-use ability (except Sleep); when using these abilities, however, he will usually have a hat of some sort: Paint Kirby wears a gray backwards cap, Mike Kirby will get a baseball cap (1st use), headphones (2nd use), or a mohawk (3rd use), Cook Kirby wears a toque, and Copy gives Kirby a visor over his eyes when used.

In Kirby's Return to Dream Land, Kirby can obtain special abilities called Super Abilities from special enemies. The abilities are Ultra Sword, Monster Flame, Snow Bowl, Flare Beam and Grand Hammer. Unlike other limited-use abilities, these abilities can be used indefinitely, but only within a small period of time. If the player decides to drop these abilities, they will disappear instantly, without a chance of being regained.

In Kirby: Triple Deluxe, Kirby can obtain a powerful ability called Hypernova, which allows Kirby's signature inhale to increase exponentially. He can inhale huge objects that only Hypernova can move. Unlike most of the limited-use abilities, Hypernova can be used until Kirby exits the stage.

In Kirby: Planet Robobot, Robobot Armor can augment some of Kirby's Copy Abilities into what are called Modes for certain portions of levels.

Some games have a special and usually powerful Copy Ability that serve as Final Weapons and can only be used against final bosses (however some abilities like Master or Triple Star can be used freely on any level after beating their respective games). These abilities, except Master and Rainbow Sword, are projectile shooters (although Master does have a ranged attack).

Originally, Kirby's appearance did not change when he had a Copy Ability (with the exception of UFO). In Kirby's Adventure, the only visible difference in Kirby's appearance would be that his skin tone changed to a peach shade, or a blue one if he has Ice or Freeze (though Kirby will remain pink with the Star Rod unless he is damaged). This change is obviously not observed in Game Boy titles. Interestingly, Kirby remains pink while having an ability in Kirby's Dream Course.

Kirby Super Star introduced the concept of unique appearances for each ability. Each ability (excluding limited-use abilities) would give Kirby an ability cap to wear, with the exception of Parasol and Hammer (though the latter was eventually given a twisted headband). Unlike later games, Kirby's skin tone occasionally changes depending on which ability he has, such as red for Fire. This was retained in the remake and the series' anime. Interestingly, Kirby: Nightmare in Dream Land had a similar case, as hats were added but some abilities had certain color changes.

In Kirby's Dream Land 3 and Kirby 64: The Crystal Shards, Copy Abilities did not receive hats or color changes (with the possible exception of Ice, which only changes Kirby to blue while he's performing the move). However, ability caps became a series staple soon afterwards. In all original games since, abilities do not change Kirby's skin color from pink (except Metal and Ghost). This may be because of the Spray Paint feature implemented in Kirby & The Amazing Mirror, or to make multiplayer less confusing. The only game to not include hats alongside Copy Abilities since then is Kirby: Canvas Curse.

In the Super Smash Bros. series, Kirby's Standard Special, Inhale, allows Kirby to copy the Standard Special of the fighter he inhaled (with the exception of Olimar/Alph). Kirby can discard his current ability by taunting, taking enough damage, or being KO'd.

In the Super Smash Bros. series, Kirby will usually get hats depending on what character he swallows. For example, when Kirby swallows Mario, he gains the same red cap that Mario wears. However, some characters change the appearance of Kirby's whole body. As an example of this, swallowing Mr. Game & Watch will transform Kirby into a pitch-black LCD version of himself, while Mewtwo will alter the shape of Kirby's body to make it resemble the horns on its head. 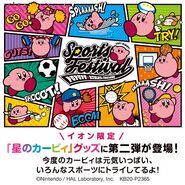