A white, high-tech visor shows up when the ability is used.

Copy is a Copy Ability in the Kirby series, debuting in Kirby Super Star.

Copy focuses on copying the ability of foes it scans. Copy is obtained from Tac enemy, who is its Helper.

Due to its similarity to Kirby's innate ability of copying abilities, Copy is commonly considered to be redundant. Despite this, Copy is capable of doing various things better than Kirby's normal inhale or doing techniques that Kirby's inhale can't do at all. Copy's standard attack damages any non-ability enemy in its range; this also applies to bosses, giving Kirby a method of damaging them when he otherwise would have to wait to inhale projectiles and spit them out (or Copy them if applicable). This attack also doesn't defeat most ability enemies; by scanning one, Kirby can turn it into a Helper, then inhale the enemy to get the same power, creating a power duo. Copy can also obtain abilities from mid-bosses without having to defeat them beforehand, allowing the player to obtain the ability early, and can again turn it into a Helper and then inhale the defeated mid-boss for the power (although this may not be desirable against Chef Kawasaki in Kirby Super Star Ultra, as Cook cannot damage him and does not have a Helper). Copy is the only normal way to obtain Crash from Scarfy and Mr. Anglep; due to Crash's power, this could be seen as desirable. In the Milky Way Wishes sub-game, the player can go to ??? and obtain the Copy Copy Essence Deluxe early, thus effectively bypassing the sub-game's gimmick of preventing Kirby from copying enemies.

Copy's main purpose was most likely to give Player 2 a character that plays similarly to Kirby, being Tac. Tac's Sneaky hand/Steal allows him to transform into a different Helper if used on an enemy that gives a Copy Ability. Tac can also use Discard Copy Ability when transformed to revert back. Tac also has Cat Magnum in Kirby Super Star Ultra, giving him long range offensive power similarly to Kirby's Star Spit. Tac is also considered to be better than Kirby in some aspects: copying an ability heals Tac, Tac's guard renders him completely invincible, and Cat Magnum allows him to use powerful projectiles at anytime when not having an ability.

Copy has not appeared in any game other than Kirby Super Star and Kirby Super Star Ultra (although Tac does appear in Kirby Air Ride). Instead, other games that feature multiplayer co-op in story mode use different methods:

Because of this, Copy is not likely to appear in future entries, although this has not been formally stated; even if Copy were to have won the first Kirby Battle Royale Copy Ability poll, it would not be added into the game. 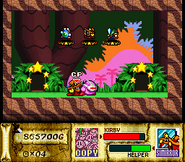