A toque, with a yellow star-shaped pin on the right side as of Kirby Star Allies.

Cook is a Copy Ability in the Kirby series, debuting in Kirby Super Star.

Cook focuses on sending onscreen enemies and projectiles into giant pot and transforming them into food items; due to this, Cook has no moves that deal actual damage. Unlike most Copy Abilities, this can only be used once, and does not have a Helper. In the situation that there are no enemies or projectiles to throw into the pot, the ability will not be expended. Cook is obtained from the Chef Kawasaki mid-boss.

Cook remains unchanged from its appearance in Kirby Super Star, being used to cook onscreen enemies and transform them into food items. Cook is obtained from the Cookin enemy.

Cook now has an extra move similarly to Crash's Super Nova and Mike's Encore. Friends can also hop into the pot if no enemies are around, or simply to drop additional food items. Cook is obtained from Chef Kawasaki, who is also its Friend Helper, despite Cook not having a Helper in Kirby Super Star and Kirby Super Star Ultra; this makes it the only Limited-use ability to have a Helper.

In Kirby Star Allies, each regular enemy (with the exception of boss-exclusive enemies) has a food item that corresponds to them. Enemies that can become friends share corresponding food items with their playable versions.

When using Cook Potluck/Supper Party Friend Ability, certain food items correspond to a Copy Ability and that ability's Helper. This is also true for Dream Friends and when Kirby does not have an ability.

In Kirby: Right Back at Ya!, Cook is changed into a full-fledged ability with a variety of uses. It is typically acquired from inhaling Chef Kawasaki's frying pan, though other kitchen utensils have often been substituted in lieu of the frying pan not being available for some reason or another.

Cook Kirby's main weapon is a frying pan with many different uses. Often he uses it as a shield, deflecting attacks. However, he can cause it to grow to massive size and use it to fry or boil large enemies. He can also cause any kind of food to spontaneously appear from it. 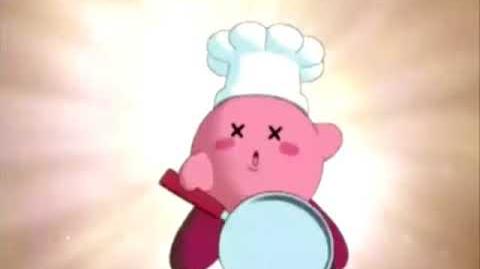 In the transformation sequence, Kirby spins and forms his hat. Then a frying pan appears from off-screen and flies into Kirby's face, slamming him in the process. Kirby then removes the pan, holds it, and poses dramatically.

Kirby's Final Smash in Super Smash Bros. Brawl is Cook Kirby. When activated, Kirby pulls out his pot and utensils, and can suck up all items, projectiles, and players into the pot. Players that get captured by this move take 38% damage from the cooking before being shot out of the pot. Any items and projectiles sucked into the pot will be transformed into other items. Kirby's Final Smash can be dodged by using invincibility or being far away from Kirby; however, the more damage an opponent has, the harder it is to avoid.

Cook Kirby gets a trophy as do all the Final Smashes. It also appears as a sticker in Super Smash Bros. Brawl using its design from Kirby Super Star. Usable by any character, this sticker increases Flinch Resistance by 140. 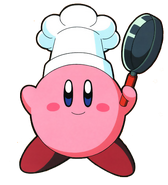 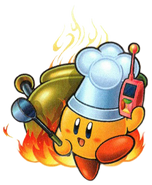 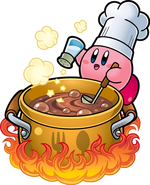 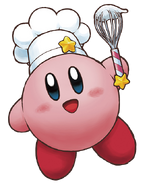 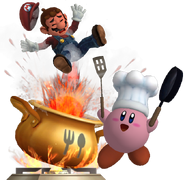 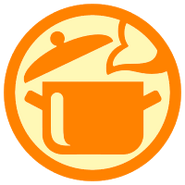