Computer Virus (also called Battle Windows) is a boss in the Kirby series, appearing in Kirby Super Star and its remake, Kirby Super Star Ultra. This boss is a satirical parody of typical, turn-based, RPG (role playing game) battles. In addition to being fought in a turn-based manner, the boss also 'sums up' what happens turn-by-turn (for example, if Kirby is hurt by an attack, the top window states that "Kirby is hurt" and so on. It also says how much damage an enemy has received).

The Computer Virus is a strange, surrealistic entity that resembles the Classic Mac OS computer operating system (replaced with a lookalike of the modern macOS in the remake), and attacks Kirby using a collection of three different monsters each time it appears. During the fight, the monsters it summons stay concealed within the computer screen. After it uses one of its attacks, it will step down from the battle screen for a short amount of time, giving Kirby his only chance to fight back. If Kirby doesn't have any ability, the stars (plus other projectiles, but not all of them) that the virus attacks with can be swallowed and spit out at the enemy. Kirby may occasionally have the option to forfeit his turn to grab a randomly-generated Copy Essence that appears on the sides. Health varies from creature to creature, but health is always increased when Kirby begins the battle with a Helper by his side, or when a Helper fights by itself (Helper to Hero). Kirby's guard move will negate damage from all attacks except for:

Most attacks can be guarded, but a few are better off being avoided altogether. Mirror's Reflect Guard can negate all the damage a player can receive from the boss, making it possible to complete the boss fight without taking a single hit.

Computer Virus first appears as the boss of The Great Cave Offensive's Crystal Area, and returns as the boss of the Milky Way Wishes planet Halfmoon. It also appears in The Arena, in Kirby Super Star Ultra's new sub-games Helper to Hero (where it has dark purple versions of the three strongest creatures), and Meta Knightmare Ultra.

The Computer Virus has five separate creatures that can be fought, though it will only summon three of them per fight. In the original Kirby Super Star, each creature is still, but in the remake, the creatures are animated a little. After each creature attacks, it will step down from its window, allowing Kirby (and a Helper, if Kirby has one) to attack it. 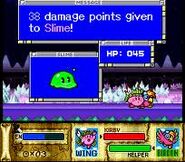 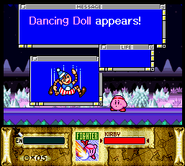