) and bombs)
Yo-Yo (from cannonballs (

It is a cannon located on the topside of the Halberd, usually near the front (although in Kirby: Squeak Squad, it is on the second-highest level of the ship).

While Combo Cannon is its most common and consistent moniker, this weapon has gone by several names:

It is an elaborate double-barreled gun turret that fires cannonballs from its main (upper) barrel and lasers from its smaller (lower) barrel. In Kirby Super Star, Kirby can stand under the main barrel and attack without taking damage, but in Kirby Super Star Ultra, the protrusion from the barrel damages him, making this boss slightly harder to defeat. This smaller barrel can be destroyed separately from the main assembly to keep it from shooting any more lasers. It has a mechanical arm that will try to grab and throw Kirby, drop bombs on him, or try to hold him in front of the firing laser. Every other time it prepares to fire its laser, a platform will rise under Kirby to try to move him into the way of the blast, although this was changed to a low-health reaction in Kirby Super Star Ultra. When it was first destroyed, it exploded and shattered pieces of bent metal went everywhere, with a force strong enough to destroy most of the top of the Halberd.

Inhaling the large cannonballs and bombs dropped by the hand give Kirby Bomb (although the former inexplicably grants Yo-Yo in the SNES version).

The cannon has been turned into yarn along with the rest of the Halberd, and Kirby fights it now with the Starship. The cannon's arm is not present, and thus it no longer tries to grab Kirby or drop bombs on him. The top cannon shoots three large cannonballs in succession; the bottom cannon still fires the laser beam, which is now a lot wider than the ones of Kirby Super Star (Ultra). It is now made up of several strands of yarn. UFOs periodically enter the fray and fire lasers at Kirby.

The top part of Combo Cannon appears as an item in Kirby Fighters Deluxe, referred to as "Team Cannon." It can fire lasers of various sizes. If only one player is holding it, it will continuously shoot little electric shots. In 2 vs 2, it fires its classic blue laser. In 1 vs 3, it fires a more powerful yellow and purple laser. The music that plays is the same as that of the Super Abilities from Kirby's Return to Dream Land.

Combo Cannon returns along with Halberd. After the Halberd is scanned by the Robobot Armor, it transforms into Halberd mode and Combo Cannon is the sole weapon to be used in this mode. It also appears as a sticker with its design coming from Kirby Fighters Deluxe, and is still referred as "Team Cannon." 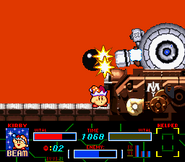 The Combo Cannon fires a cannonball.

The Combo Cannon fires a laser.
Add a photo to this gallery 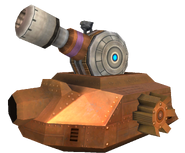 Super Smash Bros. for Nintendo 3DS (Trophy)
Add a photo to this gallery
Retrieved from "https://kirby.fandom.com/wiki/Combo_Cannon?oldid=326234"
Community content is available under CC-BY-SA unless otherwise noted.