Kirby Wiki
Register
Don't have an account?
Sign In
Advertisement
in: Articles with non-canonical information, Enemies, Characters,
and 5 more
English

Colossal Kabu is a boss in the Kirby series, debuting in Team Kirby Clash Deluxe.

Colossal Kabu looks like an ordinary Kabu, with its only difference being its gargantuan size.

Colossal Kabu is fought as part of the Colossal Double-Team, the Colossal Triple-Team, and, in Super Kirby Clash, Team Colossal Quad. The large foe slides across the ground in an attempt to hit members of Team Kirby. It then teleports, hovers in the air for a moment (occasionally over a Kirby), and drops. The boss can also spin in place, kicking dust up around it. It does not gain any abilities after half its health is depleted, unlike most bosses in the games. It no longer has a second phase when fought as part of Colossal Triple-Team or Team Colossal Quad.

Against Team Colossal Quad, Colossal Kabu now makes more deliberate attempts to hover over and land on the Kirbys, and it can also teleport three times in a row without sliding. 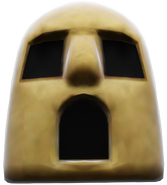