Coins are items in the Kirby series, debuting in Kirby's Return to Dream Land.

Coins are round and metal with a star logo on each face. In Kirby's Return to Dream Land and Kirby's Dream Collection Special Edition, gold coins have a green dot between each of the star's points. In the sub-game Dedede's Drum Dash and Dedede's Drum Dash Deluxe, they are referred to as "Musical Coins" and feature a musical note on their faces instead of a star. In the sub-game Kirby 3D Rumble, Coins are octagonal in shape and have ridges around their edges.

If Kirby collects every Score Coin in a Challenge, he will be awarded the Coins Complete bonus once he finishes the Challenge. This bonus is worth 1000 points.

Coins are called Musical Coins in these games, and are found in the Dedede's Drum Dash sub-game, as well as the downloadable Dedede's Drum Dash Deluxe. They exist solely to earn the player points. They come in three variations: bronze (worth 50 points), silver (worth 200 points), and gold (worth 500 points). Because of their value, gold Musical Coins appear infrequently and are often placed near enemies, where they are less easily collected.

Musical Coins are primarily arranged in straight lines or arcs that allow King Dedede to easily collect many in a short span. If he collects every Musical Coin in a level, he will be awarded the 'All Coins' bonus. This bonus is worth 1000 extra points.

A variation of the Musical Coin, known as a number coin, also exists. Number coins resemble regular Musical Coins, but are blue or pink rather than metallic, and are each marked with a white number. These coins must be collected in numerical order, as coins that are not the next in sequence will appear translucent and cannot be collected.

Coins appear in the Kirby 3D Rumble sub-game, as well as the standalone downloadable game, Kirby's Blowout Blast. The three types of coins are bronze, silver, and gold. These are worth 100, 300, and 500 points, respectively. If Kirby collects every Score Coin in a level, he will be awarded the All Coins bonus once he finishes. This bonus is worth 1000 points.

Coins appear in the Coin Clash Battle Mode. Players collect as many coins as they can, and the one with the most wins. They generally appear floating just above the ground, but can also be found in piles of treasure; some coins appear that are worth five normal coins. Coins can be stolen from opponents by attacking them; the ghost enemy can also capture players and cause them to drop coins at a rapid pace.

Battle Coins also appear in Kirby Battle Royale, and are earned by participating in the game modes. The player can spend them on headgear and other collectibles in the Collectibles menu. 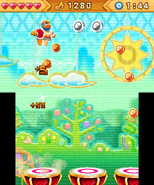 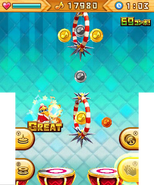 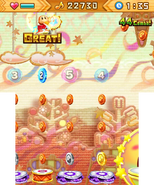