Bugzzy
Cocoa Cave is the third level of the sub-game Dyna Blade that appears in Kirby Super Star and its remake. It follows Mallow Castle and precedes Candy Mountain.

The level is divided into six main rooms. The first, like many of the other levels in the sub-game, is the entrance room with a sole Knuckle Joe and the entrance to the cave. The second room is perhaps the least unique of the entire level, a large, purple tunnel with enemies serving as the only obstacle (mainly Plasma Wisps, Bombers and Noddys). The third room is yellow and most prominently features a strong wind blast coming in from the left of the screen. Spikes, Scarfys and Kabus are added to increase the difficulty of the room. The fourth room is red, probably due to the fact that it is above a large storage of magma. The room is also the first to feature Gim, the enemy and helper for Yo-Yo (and thus the first place Kirby can get the ability without mixing or going to a trial room). The fifth room is in stark contrast with its predecessor; a blue, icy tunnel. Due to its environment, many Chillys have taken it as their habitat. The latter part of the room features many Launch Pads and a Warp Star leading to the last room, which is the exit of the cave; the mid-boss of the level, Bugzzy; and the exit door.

A remix of this level's music plays on the Top Ride course Metal and Target Flight of Stadium in Kirby Air Ride. This remix was reused for the extra stage of Patched Plains in Kirby: Planet Robobot. The music also was rearranged as the music for Gondola Ride in Kirby and the Rainbow Curse. 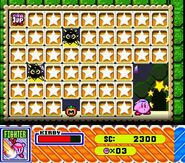