Cloudy is an enemy in the Kirby series, debuting in Kirby's Pinball Land.

Cloudy is a blue cumulus cloud with two eyes and a mouth. Its body ends in a point in its artwork, though its body is puffy all around in-game.

Two appear in the entire game, both of which are attached to walls in the middle stage of Kracko Land. When Kirby hits a Cloudy, it will release an enemy or item, which will fly over to the other Cloudy and disappear. If Kirby hits all the items it releases (an apple, a Twizzy, a Gordo, a Maxim Tomato, and a Bronto Burt) without leaving the middle level, Kirby can hit it again, causing a Warp Star to be released. If Kirby hits this Warp Star before it disappears, he will be transported to the Kracko Land Bonus Game.

Cloudy cannot be defeated, and as such, can be hit an infinite number of times. 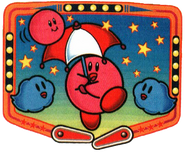 Retrieved from "https://kirby.fandom.com/wiki/Cloudy?oldid=331410"
Community content is available under CC-BY-SA unless otherwise noted.