Kirby Wiki
Register
Don't have an account?
Sign In
Advertisement
in: Copy Ability, Articles with cancelled or unreleased content, Copy Abilities in Kirby: Right Back at Ya!,
and 6 more
English

Anime: Yellow bandana with green stars. The broomstick is made of purple plastic rather than wood.

Cleaning, also known as Clean or Broom, is a Copy Ability in the Kirby series, debuting in Kirby's Dream Land 3.

Cleaning focuses on various appliances that aid in cleanliness, most notably the broom. Cleaning can be combined with one of the Animal Friends to give it a different move. It is also the only Copy Ability that can destroy the Cleaning Ability Blocks. Gooey, who behaves near identically to Kirby, can also obtain Cleaning. Cleaning can be obtained from the Broom Hatter (which had given no Copy Ability prior to this game), Keke (broom or enemy), and Cleaning Bukiset enemies, and the Haboki mid-boss.

Cleaning returns, now with multiple moves and wearing a white bandana decorated with green stars. Some of its moves include Animal Friends from Kirby's Dream Land 3, referencing the Copy Ability's debut game. Cleaning can now use its Bluster and Splash elements to enhance other Copy Abilities; it is the only Copy Ability in the game to feature multiple elements in its base form. It has two main Friend Abilities, Friend Vacuum and Friend Super-Vac; Friend Vacuum allows Kirby to suck up nearby enemies and Friends with a vacuum cleaner, Friend Super-Vac allows Kirby to shoot out any sucked up Friends, similarly to Friend Throw. Cleaning is obtained from Broom Hatter, who is its Friend Helper.

Cleaning was slated to appear in Kirby GCN, retaining its appearance from Kirby: Right Back at Ya!. Its Helper would be Broom Hatter. While not much was shown of it, Cleaning has an attack that greatly resembles Broom Flick.

Cleaning is greatly updated for its debut in Kirby: Right Back at Ya! Kirby gains a yellow kerchief with green stars over his head, with a purple and yellow broom. The sparkles that shoot from it when swung can hurt enemies or cause any garbage and grime to magically disappear. Kirby can also sit on the broom and fly quickly through the air. 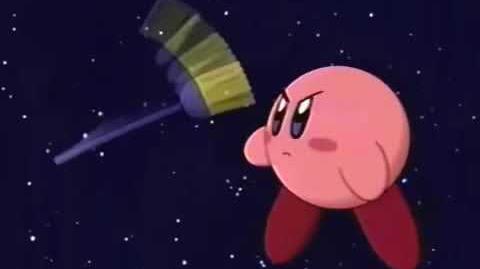 In the transformation sequence, the broom hits Kirby until he catches it, swings around and forms his kerchief. 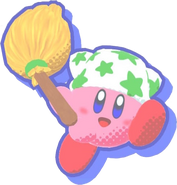 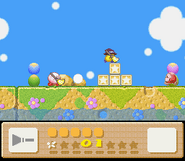