Kirby Wiki
Register
Don't have an account?
Sign In
Advertisement
in: Articles with derivative titles, Enemies, Characters,
and 2 more
English

Clayn is an enemy in the Kirby series, debuting in Kirby's Return to Dream Land. It grants no ability when inhaled.

Clayn is a light brown slug-like creature. It has a small red mouth and two blobby eyestalks, each of which holds a small black eye.

Clayn is normally collapsed in a brown puddle on the ground. When the player draws near, Clayn will pop out in an attempt to damage the player. This behavior is nearly identical to that of Oro and Sandman. Clayns are sometimes strategically placed in front of doors.

Clayn's name is derived from the word clay, referencing the physical appearance of the enemy. 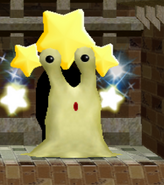