Kirby Wiki
Register
Don't have an account?
Sign In
Advertisement
in: Enemies, Characters, Articles with non-canonical information,
and 7 more
English

Bomb from missiles and drills, Stone from rocks

Clanky Woods is a boss in the Kirby series, debuting in Kirby: Planet Robobot as the first boss of the game. It is the robotic boss of the game's first level, Patched Plains, where it first chases Kirby and then faces him in a true battle. It has a drilling attack and can shoot missiles.

Clanky Woods is apparently the result of Whispy Woods being mechanized. It has metallic tan "bark" and two long bionic claws replacing its small tree stubs on its sides that connect to the missile-shooting cannon in its mouth. Clanky Woods also has two pink circular eyes, four drills that replace its roots and acts as his legs, and pipes connecting to a bunch of green steel balls atop its trunk that replaces its leaves.

Clanky Woods 2.0, from top to bottom, has black steel balls connecting to pale tan colored pipes connecting to his similarly-colored trunk. The mechanical tree now has one long red eye visor and an orange missile-shooting cannon. Its silver bionic arms and legs are now black with silver spikes on the joints. Clanky Woods 2.0 also has black spears for roots instead of the tan drills like he had in his Story Mode.

Clanky Woods is encountered three times throughout the game. Its first appearance is toward the end of Stage 1 of Patched Plains. After Kirby enters the area, a bunch of fleeing Waddle Dees pass him by. From there, Clanky Woods enters the scene using its four drill legs, roars upon noticing Kirby, and starts to chase him down. It will launch missiles from its mouth and will try and attempt to ground pound on Kirby. During this phase, it is only necessary to escape Clanky Woods by continuing to the left; however, it can be attacked and defeated, and doing so will yield a rare sticker for Kirby. It appears again in Stage 5 of Patched Plains as the level boss. It appears once more in Stage 8 of Access Ark; it appears again in another chase scene similar to that of Stage 1 of Patched Plains, but Kirby is now in his Robobot Armor instead; defeating him here yields a Code Cube for Kirby instead of a rare sticker.

When Clanky Woods is knocked down to half health, it falls off the stage. The platform the battle takes place on then extends into a full ring. The boss then emerges from a large screw platform in the middle, and jumps on the back-side of the ring (while Kirby remains at the front). The fight then continues, with Kirby battling Clanky Woods around the ring, as opposed to the static area from earlier in the battle. Clanky Woods halts and then begins dashing around the ring very quickly. Clanky Woods then drills into the ground with its front legs, causing boulders to fly out of the ground. Then, the boss repeats its homing missile attack.

When Clanky Woods' vitality is nearly depleted, it causes all the sections of the ring that Kirby is not standing on to rise up, forming walls and trapping Kirby in a narrow space. The boss then occupies the central area, where it cannot be directly hit with most attacks. Clanky Woods then jumps as drill bits fire out of the tubes on the walls, which fly horizontally and explode. Clanky Woods then shakes, causing pieces of its canopy to fall off and bounce into Kirby's space, then bounce off-screen. If Kirby hits these enough, they will bounce back and hit the boss. Then, it jumps into Kirby's space, occupying the upper portion. There, it attacks with its front drill legs. Its last attack leaves its drill stuck in the ground for a moment, leaving it open to be attacked directly. After that, the boss fires four of its homing missiles.

Once Clanky Woods is defeated, it is ruptured by small internal explosions, and rendered inoperable. Unable to move, it sits in the middle of the arena and cries tears of oil as Kirby does his dance and finishes the level.

Clanky Woods drills into the ground.

Clanky Woods makes an appearance in a "2.0" form in Meta Knightmare Returns, and is the first boss of the game mode. It uses the same attacks as before, but with increased strength and magnitude, such as its homing missile attack uses four missiles instead of two. Clanky Woods 2.0 will initially drop non-exploding pieces of its canopy but, later in the attack, will swap to explosive ones that cover the ground in flames.

The same phase with the full ring will begin when it reaches half health. It will fire missiles two times in a row, and its speed when running around the ring is increased. It also will now jump around the stage in addition to running.

When its health is nearly depleted, the same phase with narrowing the battlefield will occur. All of Clanky Woods' attacks for this phase remain the same, with added speed and intensity, as well as attacking more times than it did previously.

Once Clanky Woods 2.0 is defeated, it behaves the exact same as its original battle. 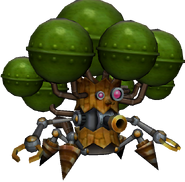 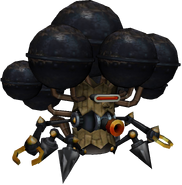