City is the fifth level in Dedede's Drum Dash Deluxe. It succeeds Bouncing Boss Battle and precedes Boarding the Halberd. It is part of an amusement park built by Magolor.[1]

King Dedede bounces across drums while collecting Musical Coins. The background is a collection of soft hues, including orange, pink, lavender, yellow, and cyan. Yellow trees, a carousel, spinning wheels, and various other structures decorate it. The sun and clouds (which take the form of colorful pearls) appear as cardboard cutouts suspended in the air by strings. Diamond patterns run through the sky as well.

The secret version of this level has more animated background details. Included among them are a carousel, roller coasters, spinning wheels, and other theme park rides. Triangular patterns and sharp, geometric shapes hover run through the sky as well.

The music that plays here is a rearrangement of "City" from Kirby Air Ride. The player is given two minutes and 15 seconds to clear this stage.

The tempo is fast. This level introduces spikeflip drums--these drums have spikes coating their undersides and flip over with every beat. Dedede must time his bounces precisely to avoid landing on the spikes. Many enemies also inhabit the stage: Waddle Dees and Clown Acrobots bounce up and down, Scarfys hover in the air, and Swordorys routinely thrust themselves forward in a stabbing motion. Number coins and a Recovery Ring also appear to grant points and heal Dedede, respectively. The level ends when Dedede reaches the Goal Drum and launches skyward.

By clearing the first six levels, the player unlocks secret levels. City is unlocked by completing the secret Floral Fields.

The tempo in this level is the same as its normal counterpart. There are more pits in the path and significantly more spikeflip drums, making the stage more hazardous. There are also a few breakable drums that collapse after one bounce. Many enemies inhabit the stage: Gordos and Big Gordos hover in the air, Soarars swoop in and out of the foreground, and Beetleys pass in and out of the foreground while swiping their horns. Backbeat cymbals and number coins also appear to create coins and grant the player points, respectively. The stage ends when Dedede reaches the Goal Drum and launches skyward.

Keychains are hidden in the background of every level in the game. The keychains in City and its secret counterpart are Kirby from Kirby's Adventure and Golden Egg Statue. The former appears in each level, and the latter represents HAL Laboratory, the development studio that creates Kirby games. 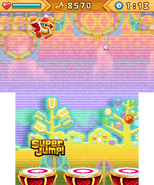 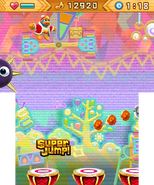 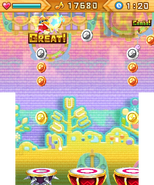 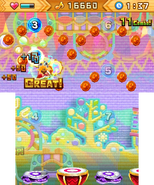