Kirby wears a hat in the shape of a beige circus tent with orange stripes on the right and purple stripes on the left with an orange flag on the top of each side. What appear to be a clown nose, two shiny black eyes, and a curly white mustache are on the front.

Circus is a Copy Ability that was introduced in Kirby: Triple Deluxe.

The Circus ability allows Kirby to use many circus-related moves. He can quickly juggle flaming bowling pins, inflate balloon sculptures that pop and damage nearby enemies, jump through fiery hoops, balance on large balls, and bounce on trampolines. All attacks that use fire can break ice blocks. Most of Circus's attacks are stationary or take Kirby back to where he was originally standing, making it a weaker ability in terms of its mobility options. 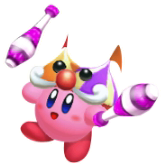 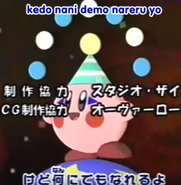 Kirby: Triple Deluxe
Add a photo to this gallery
Retrieved from "https://kirby.fandom.com/wiki/Circus?oldid=321754"
Community content is available under CC-BY-SA unless otherwise noted.