Kirby: Right Back at Ya!
(D'Preciation Day)

Chuckie (Chucky in Kirby's Pinball Land) is an enemy in the Kirby series, debuting in Kirby's Dream Land.

Chuckie is a silly jack-in-the-box with a mind of its own. He has a blue head that bears a goofy expression on his face. He resides in a striped pink and blue box with a yellow question mark on the front. In the games, the head isn't directly connected to the box, so it can float around freely.

In the anime, Chuckie's design stays true to his initial design, though an accordion spring was added which keeps him anchored to his box. In addition, he can change his usually-carefree face into a monstrous one. When he switches faces, he shows a more malicious-looking face with an evil grin, sunken-in eyes, and a longer and sharper-looking tongue.

Chuckie appears in Castle Lololo. He hides inside a box marked with a question mark. The enemy pops out of it when Kirby approaches. In the Extra Game, he is replaced by Hurly.

Chuckie appears as an enemy in Stage 4. He remains stationary and drops a Replica item when defeated.

Though not appearing in-game, a creature that appears to be Chuckie can be found on the file select screen. The player has to begin The Great Cave Offensive and then reset the game. The file image depicts Kirby discovering a Treasure Chest with a Chuckie-like creature popping out of it. This Chuckie, however, is yellow instead of purple and pops out of a Treasure Chest to match the sub-game thematically, and like in the anime, it has a neck (albeit a blue one).

Chuckie is a monster appearing in the episode D'Preciation Day, hired when King Dedede feels jealous and unloved by the town during a week of appreciation days. In a fit of rage, he decides to turn the entire town against Chef Kawasaki on his respective appreciation day. On Kirby's day, Dedede sends him a gift for being a good sport about the king's pranks. He purchased this legitimate gift from Nightmare Enterprises and expected a fun item for Kirby to enjoy. Waddle Doo delivers the present to Kirby. When he tries to unwrap the starry wrapping paper, Chuckie erupts out of it and knocks Kirby away. The package even comes with a small card attached, warning that Chuckie may seem like a playful jack-in-the-box toy, but is really quite dangerous. Instead of trying to surprise Kirby like in the games, he jumps on him and can use his expandable neck as a whip to batter him. His head even contorts into a ghastly looking one as he rams Kirby into a tree. Kirby takes quite a beating until he inhales Buttercup's parasol and becomes Parasol Kirby. Kirby is then easily able to wipe the floor with Chuckie, launching him into the air with a Circus Throw attack and finishing him by severing his expandable neck with a Parasol Drill attack.

Chuckie's name is derived from "upchuck," a slang word for vomiting. This relates to Chuckie's dizzying and erratic behavior in the game, as well as his sickly face. 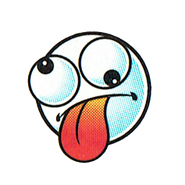 Chuckie smacks Kirby with his head.