ChuChu (sometimes written as Chuchu) is one of Kirby's Animal Friends. She appears as a playable character in Kirby's Dream Land 3 and has made several cameo appearances throughout the series.

ChuChu is a pink octopus with a large red bow on the back of her head, has rosy cheeks, and has purple eyes (silver in the opening of Kirby's Dream Land 3 and blue in Kirby Star Allies). She is infatuated with Kirby and it is implied that she is a romantic interest. Although sweet to Kirby, she is shown to be very short tempered with the other animals.

ChuChu, as well as all the other animal friends, have the ability to share and enhance whatever ability Kirby currently has. When Kirby is paired with ChuChu, she can swallow enemies while underwater, and ChuChu has her unique ability to stick onto ceilings and "walk" on them, but she can't do the same with walls. Her best friend is Nyupun.

Kirby's Stone + Cutter Power Combo lets him turn into statues of any of his past animal friends, including ChuChu. Kirby can hop around when becoming this statue.

ChuChu appears as one of Paint Roller's drawings in the sub-game Paint Panic.

ChuChu appears as a collectible sticker.

ChuChu's likeness is used for one of the sets of Gear Doctor Healmore can obtain. Kirby can purchase and use the Chuchu Flask and Chuchu Cap from the Shoppe; the cap implies to be ChuChu herself, as it even moves and blinks (although the game jokingly states this is "a trick of the light").

ChuChu appears as a part of Cleaning's ability sets, flying on a broom in the same manner as Kirby's Dream Land 3. She also appears on the celebration picture "A Dream Above the Clouds".

ChuChu appears as a Novice-class support spirit in Super Smash Bros. Ultimate which can be obtained after fighting Jigglypuff on the Dream Land 64 stage with sticky floors. When applied to a fighter, the fighter will have a Super Leaf equipped.

ChuChu's name may be derived from the Japanese onomatopoeia chu, the sound of a kiss; it may also be derive from tutu, a short skirt worn by ballerinas. These could be in reference to her femininity, with the latter also referencing her general shape and possibly color. 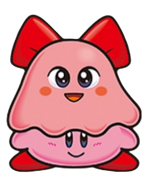 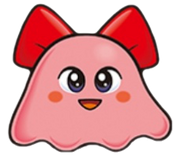 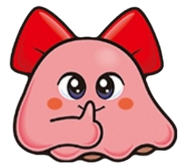 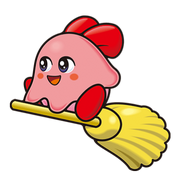 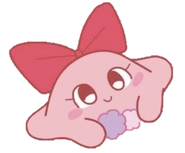 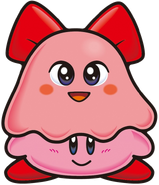 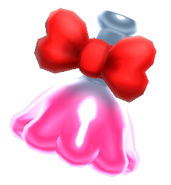 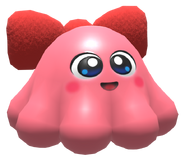