Regular enemy
Chip is an regular enemy in the Kirby series, making its debut in Kirby & The Amazing Mirror. It yields no Copy Ability when inhaled.

There is a larger version of Chip that was featured in Kirby: Planet Robobot, named Big Chip.

Chip is a small yellow teardrop-shaped creature with a fox-like tail that is quite large in comparison to its body. Chip has no visible limbs on its body. It also is consistently seen with a happy expression and small beady, shiny eyes. Starting with Kirby: Triple Deluxe, the top of its head is more pointed instead of floppy, and is now a lighter color to the rest of its body.

Chip is a simplistic enemy in behavior, simply hopping about and continually chasing Kirby. Normally, Chip will hop only within a confined radius; on occasion, however, it will charge itself up and leap across a great distance.

Chip behaves like it does in Kirby & The Amazing Mirror; however, they're not restricted to hopping solely in Kirby's direction, as they now can hop anywhere in the area.

Chip has a behaviour similar to how it did in Kirby: Squeak Squad. When it falls from a height, its body appears to extend or droop, similar to a raindrop falling from the sky. Its eyes are slightly larger. It can also hop between backdrop and foreground areas.

Chip behaves just like it did in Kirby: Triple Deluxe.

Chip behaves like it does in Kirby: Triple Deluxe and Kirby: Planet Robobot. Like most enemies in the game, scaled-up versions of it appear that can be Inhaled for a Blaster Bullet.

Chip appears in Kirby Star Allies and acts the same as in previous games.

Chip is possibly named after a food, due to its body resembles the shape of a chocolate chip. Its name in Japanese, チップ (Chippu), can also be translated as "tip," which may reference its pointy shape in general. 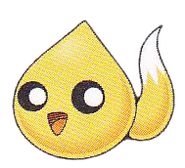