Meta-Knights
Chapter 7 is the seventh and final chapter of Revenge of Meta Knight, a sub-game appearing in Kirby Super Star and its remake.

With the Reactor destroyed, the Halberd's fate has been sealed, with only a sliver of stamina remaining. The Meta-Knights are now in a panic and preparing to evacuate; Captain Vul is the first to go. The first room is autoscrolling. There are Copy Essences for Cutter, Parasol, Yo-Yo, Stone, and Ninja. The room features collapse blocks, Star Blocks blocking tight passageways, many Magical Sweepers, and a couple of Noddys. A Maxim Tomato appears near the end of the room, but it is tricky to get due to the collapse blocks and having to backtrack, possibly resulting in being crushed. Two Maxim Tomatoes appear in the beginning of the second room, however, along with an elevator that leads upward, leading to the helm and a final confrontation with the Meta-Knights in a last-ditch effort to dispatch Kirby. This fight features more Meta-Knights than most Meta-Knight fights. After defeating the Meta-Knights, Axe Knight and Mace Knight evacuate, leaving just Meta Knight and Sailor Waddle Dee. An elevator leads to the third room, containing Copy Essences for Ninja, Sleep, and Cutter, and a Maxim Tomato. The fourth room is a duel with Meta Knight himself. A sword is placed in the ground for Kirby to grab for the Sword ability, but waiting for 20 seconds will cause the sword to disappear, in which Meta Knight will then outstretch his sword and jump down into the center of the arena; waiting allows Kirby (and his Helper if applicable) to maintain his ability, but wastes a lot of time, as the gimmick of the sub-game is the time limits. Once defeating Meta Knight, his mask will break and he will quickly show himself in his cape and disappear.

One large explosion occurs on the Halberd, sending Kirby flying. He wakes up to find a friendly Wheelie, and using the Wheelie Rider formation to escape the doomed Halberd. Meta Knight returns and tries to hinder Kirby's escape. The last area contains bottomless pits and bumps that need to be jumped over in order to keep going until the end. Afterwards, many small explosions can be seen as the Halberd crashes in the distance, landing in the Orange Ocean (later known as Secret Sea). Kirby rides away on Wheelie, passing through the desert as the sun sets. The cast for Kirby's main 19 Copy Abilities and Helpers appear as Kirby rides away. 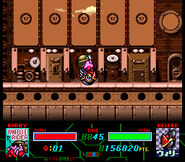 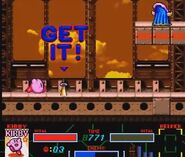 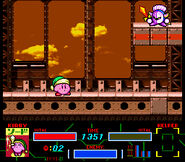 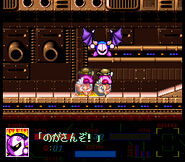 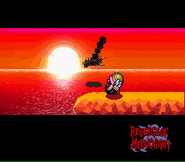 Wheelie Rider jumps off of a ramp, escaping the Halberd. (Kirby Super Star Ultra)
Add a photo to this gallery
Retrieved from "https://kirby.fandom.com/wiki/Chapter_7?oldid=313168"
Community content is available under CC-BY-SA unless otherwise noted.