Chapter 6 is the sixth chapter of Revenge of Meta Knight, a sub-game appearing in Kirby Super Star and its remake.

The defeat of Heavy Lobster destroys the right wing of the Halberd, causing it to lose its flight abilities and drop to a fourth of its stamina. The first room features many Bronto Burts and Cannons, along with the occasional Blade Knight. Entering a certain cloud (indicated by being surrounded in food items) will cause the crew to panic, leading to a secret conversation. The secret room contains Copy Essences for Parasol, Jet, and Wing, an Invincible Candy, a Bomber, a fight against Chef Kawasaki and Bugzzy, and a few food items and a Maxim Tomato. The second main room features wind, along with Broom Hatters, teleporting Plasma Wisps, and Scarfys, along with walls that can be destroyed by hitting Bomb Blocks. The third room contains many switches and gates that need to be quickly pressed, otherwise Kirby will have to return to the beginning of the room via an air vent. Suplex and Wing Copy Essences are present at the beginning of the room to make this easier by using their dash attacks. After progressing past the area with the gates and climbing up the ladders, Kirby has to use the elevators to go downward, which are guarded by Moto Shotzos. The second elevator needs to be ridden down two levels in order to press a Switch, which will grant the first elevator access to lower levels. Taking the first elevator down one level will lead to a Yo-Yo Copy Essence and a 1UP. Taking the elevator down all the way leads to an area willed with Twizzys and Tookeys, and Moto Shotzos guarding a room accessible by destroying the Bomb Block. This room contains Mace Knight's secret stash of food items, a Maxim Tomato, and a 1UP, along with a Noddy and a Knuckle Joe. The fourth main room contains a Maxim Tomato and a Bomb Copy Essence, along with dialogue hinting at how to defeat the next boss, the reactor. Destroying the reactor causes the Wheelies powering the Halberd to go loose. 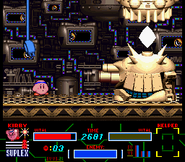 Kirby arrives at a windy area underneath the Halberd. (Kirby Super Star Ultra)

Sword Kirby attacks a Plasma Wisp as he is pushed by the wind. (Kirby Super Star Ultra)

Suplex Kirby dashes over a switch to reach a gate before the timer runs out. (Kirby Super Star Ultra)

Multiple Wheelies are released upon the reactor's destruction. (Kirby Super Star Ultra)
Add a photo to this gallery
Retrieved from "https://kirby.fandom.com/wiki/Chapter_6?oldid=313167"
Community content is available under CC-BY-SA unless otherwise noted.