Chapter 3 is the third chapter of Revenge of Meta Knight, a sub-game appearing in Kirby Super Star and its remake.

After Kirby's Warp Star was shot down by Main Cannon #2, Kirby wanders through the forested area of Candy Mountain. The first room has Twizzy and Tookey as the common enemies. The second room is inside of a tree, featuring Cappies and Tacs near the bottom, and Poppy Bros. Jrs. balancing on apples near the top. This room and the next feature Bomb Blocks that need to be destroyed in order to progress. In the bottom left is a 1UP that can be obtained by inhaling it through the wall. The room features an optional area with a Switch that spawns a Maxim Tomato and a Shotzo. Upon reaching the area with the Poppy Bros. Jr. balancing on an apple, one can go right and down to find a secret area. There is a Star Block that can be destroyed, revealing a door that leads to Copy Essences for Cutter, Sword, and Fighter. In the third room, Kirby has to fight Twin Bonkers, with Ice and Cutter Copy Essences being offered beforehand, as well as a Walky being the first enemy in the room. Obtaining Hammer can be used to pound a couples of stakes, leading to a Maxim Tomato and a 1UP, as well as Copy Essences for Mirror, Parasol, and Ninja. Near the end of the room is a Copy Essence for Wheel, which can make ascending the mountain in the next room faster, preferably as Wheelie Rider. After ascending the mountain, Kirby needs to light the fuse of the right cannon. Getting into the cannon will cause it to spin and turn upside-down before flying like a rocket instead of shooting Kirby out of it. This will lead to Dyna Blade, but instead of fighting her, she assists Kirby to flying him to the Halberd. 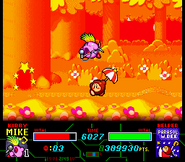 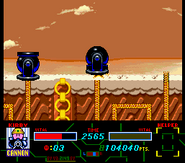 Kirby stands in an area inside a tree with Cappys and Tacs. (Kirby Super Star Ultra)

Kirby climbs up a ladder with a Poppy Bros. Jr. above him. (Kirby Super Star Ultra)

Kirby meets up with Dyna Blade. (Kirby Super Star Ultra)
Add a photo to this gallery
Retrieved from "https://kirby.fandom.com/wiki/Chapter_3?oldid=313163"
Community content is available under CC-BY-SA unless otherwise noted.