Chapter 2 is the second chapter of Revenge of Meta Knight, a sub-game appearing in Kirby Super Star and its remake.

After Kirby was blown off the Halberd, he gives chase, traveling across many small islands, with Birdons and Glunks being prominent enemies, and fighting Iron Mam in the first area. The second room features Jungle Bombs and Scarfys. The third room is an autoscrolling segment in a cave underwater. This room also prominently features Glunks, as well as Rockys near the last part which requires Kirby to destroy Bomb Blocks in order to prevent getting crushed. This eventually leads to a room with Copy Essences for Parasol, Bomb, and Wing, followed by a fight with Whispy Woods, and then Twin Woods directly afterward. After defeating Twin Woods, a Warp Star appears for Kirby to take and pursue the Halberd, however, Main Cannon #2 is now active and ready to shoot him down. 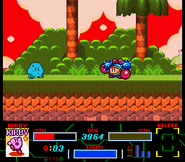 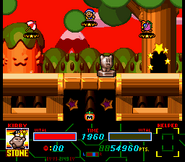 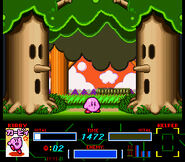