Channel PPP is a group of Waddle Dees in the Kirby series. They made their debut as a part of the Kirby 25th Anniversary Twitter account (now Kirby Twitter), but first appeared in a video game with the release of Kirby Battle Royale.

Reporter Waddle Dee is the leader of the crew. He wears a red bow tie and holds a microphone. As his name suggests, he is the head reporter.

Camera Waddle Dee is the crew's cameraman who always carries a bulky video camera. He wears a permanent apathetic expression and a backwards green baseball cap.

Microphone Waddle Dee is the crew's boom operator. He wears a pair of magenta headphones and carries a boom mic on a boom pole.

Assistant Waddle Dee is Reporter Waddle Dee's personal assistant. He holds up a notepad with words or images drawn on it, possibly for use as a cue card. He wears a blue beanie.

The group travels in an orange buggy that has a Waddle Dee face mounted on the front, a satellite dish on the back, and blue wheels with star-shaped hubcaps.

All four members of the Channel PPP staff work diligently at their positions to get news reports and interviews from around Planet Popstar. Their efforts are shown on Twitter to be fraught with danger or discomfort.

Being a reporter, Reporter Waddle Dee is very outspoken and enthusiastically describes the situations he encounters; he often plays to the audience. His reports on Twitter show him to be excitable. He is shown to be braver and more aggressive than his partners as well. In Kirby Battle Royale, Reporter Waddle Dee roots for all strong fighters equally until Kirby defeats Meta Knight, at which point he shifts his support fully to Kirby.

Camera Waddle Dee is cynical and somewhat gruff to anyone who interrupts his work. He appears to care little about most things, even joyous holiday celebrations. His apathy gives him a higher tolerance for abuse. In Kirby Battle Royale, Camera Waddle Dee does not pay Kirby any mind until he proves himself by rising up the ranks in The Cake Royale. He gains respect for the hero and admits that he wants Kirby to win the tournament before his partners do.

Microphone Waddle Dee does his job like the others. One early report shows his boom mic in-frame during shooting, suggesting that he may be less skilled at his job than the other members. In Kirby Battle Royale, Microphone Waddle Dee implies that he cares about what language the audience hears during his recordings, hoping that Meta Knight "keeps it clean." He hopes Kirby wins the competition, but he is not as zealous in his fandom as the other crew members.

Assistant Waddle Dee is the second-most-common crew member to appear on-screen during reports. He is cowardly, as he flees from scary or threatening characters while his teammates do their jobs. He is shown to get into more uncomfortable situations than his peers. Additionally, he has poor artistic abilities and a habit of sleeping on the job, though he is the only crew member shown to have driving skills. In Kirby Battle Royale, Assistant Waddle Dee is complimentary and encouraging to Kirby as he competes. He is portrayed as more fanatical about the hero than his teammates are, as he considers Kirby an inspiration.

The Channel PPP news crew appears exclusively in The Cake Royale. Reporter Waddle Dee and Camera Waddle Dee first show up at the stadium while Kirby is in the Bronze League, and the other two members arrive at the end of the Gold League. None of these characters do or say anything plot-relevant; they merely stand around the stadium hub and deliver flavor dialogue if the player chooses to talk to them. They are given more presence than other non-player characters, however, as the camera zooms in during some of their news reports.

The news crew, usually just Reporter Waddle Dee and Camera Waddle Dee, holds brief interviews with strong tournament participants and viewers. They interview a Blue Kirby and a Waddle Dee fan before turning their attention to the rising star, Kirby. Once he is ready for his Qualifier Battle against Meta Knight in the Gold League, the entire crew appears to interview him. They root for Kirby to win the entire championship after Meta Knight loses.

The reporters are not consistently in the stadium after Kirby first meets them. Their final appearance is at the point when King Dedede appears to threaten Kirby before the Championship Battle.

Channel PPP's name seems to be derived from Pupupu[1], the Japanese name of Dream Land. This name would reference how Channel PPP is presumably the only news station in Dream Land (excluding Kirby: Right Back at Ya!, which has the similarly-named Channel DDD instead).

Kirby of the Stars: Star Allies - The Great Pinch of the Universe!? 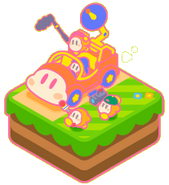 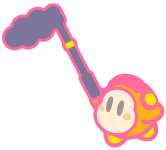