Paint (from his projectiles)

Boss
Chameleo Arm (Ghameleo Arm in Kirby Super Star) is a boss in the Kirby series. His name comes from the animal, the chameleon, and the body part, the arm. Chameleo Arm is one of the few sources of the rare Paint ability.

Chameleo Arm is a very large chameleon-like creature who can change color at will, even after Paint Kirby forcibly paints him after eating a ball of paint spat out by Chameleo Arm. He has two hook-like hind legs similar in shape to a fishing hook. Chameleo Arm has horn-like protrusions on the back of his head. Down his spine, Chameleo Arm has many rounded scales and striped markings. Chameleo Arm has large sparkling blue eyes that take up a majority of his entire face. He may also draw inspiration from drepanosaurs, which are extinct reptiles resembling chameleons who had prehensile tails tipped with claw-like hooks.

Chameleo Arm can change into a total of fourteen possible colors (six in the original). These are lime green, blue, purple, pink, red, orange, yellow, dark green, cyan, black, vermilion, maroon, white, and gold. In Kirby Super Star Ultra the colors that Chameleo Arm morphs into are based on which sub-game he is faced in (The first seven listed are found in The Great Cave Offensive's Old Tower Area and The Arena, and the last seven found in Hotbeat of Milky Way Wishes and Helper to Hero). His colors are more dull and subdued in Milky Way Wishes. This is not true in the original Kirby Super Star as all of his color schemes remain the same regardless of the subgames.

Chameleo Arm appears as the boss in three different sub-games. First he can be fought at the middle of Old Tower Area in The Great Cave Offensive and then once more on Hotbeat in Milky Way Wishes. He is also fought alongside the rest of the bosses in The Arena and in Helper to Hero.

Chameleo Arm attacks by curling up into a ball and speedily rolling across the screen trying to plow into Kirby. He may also attack by sticking out his tongue to latch onto Kirby or his Helper and eat them before quickly spitting them back out. He uses his prehensile tail like an arm to swing across the entire arena and latch onto the wall. The two tails can be extended as an attack, as well. He can also blend in with his surroundings by changing his skin's color to copy the screen's background. This makes him mostly invisible to Kirby.

After latching onto a wall, Chameleo Arm can also spit out a trio of paint blobs that give Kirby the Paint ability. If Kirby uses Paint, Chameleo Arm will be covered in paint, changing his color and making him permanently visible (Chameleo Arm can still change his color, however). As stated above, the colors in Kirby Super Star Ultra that he can change into are reliant on the sub-game he is fought in. 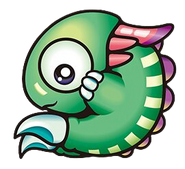