Kirby Wiki
Register
Don't have an account?
Sign In
Advertisement
in: Enemies, Characters, Enemies in Kirby 64: The Crystal Shards,
and 2 more
English

Chacha is an immobile tropical foe from Kirby 64: The Crystal Shards that dances and attacks by shaking its maracas at Kirby. Its maracas also shield its from most projectile attacks. That being said, the most common way to defeat it is by inhaling it. Chacha gives no ability and appears primarily on Aqua Star.

Chacha is pale, sphere-shaped creature and always displays an elated smile on its face. It has a small tuft of blond hair, detached, ball shaped hands, and wears a brown grass skirt. The most noticeable feature is its vividly colored maracas.

Chacha stands in place, shaking its maracas and dancing to the rhythm. Every few seconds, it turns towards Kirby and swings its maracas down in front of it a few times, supposedly as an attack. When Kirby holds it above his head, Chacha wiggles about with its maracas overhead, similar to its normal behavior.

Chachas are also seen in the background of their native stage. These dance about like the ones in Kirby's path, but do not brandish their maracas as weapons and thus pose no threat. Chachas are located most plentifully on Aqua Star, especially in stage three. However, they also make an appearance on Neo Star, in the background of one room in the fourth stage.

Chacha's name is derived from the famous Cuban ballroom dance named the Cha-cha-cha. 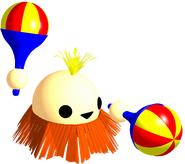