Poppy Bros. Sr., Jukid, Mr. Frosty, Iron Mam, Bonkers, Chef Kawasaki, Bugzzy
The Cave Planet Cavius (originally Cavios) is the cavern star from the sub-game Milky Way Wishes of Kirby Super Star and its remake Kirby Super Star Ultra and exists in a galaxy near Planet Popstar. It is the fifth planet, following Hotbeat and preceding Mekkai; however, because Milky Way Wishes is a non-linear game, it can be played at any time. The surface of Cavius is mountainous, but it also has many craters. Its first main area is a mountain, which leads to a system of caves that contain rooms with all the mid-bosses faced until that point in the game. Near the core of Cavius is a large water reservoir. 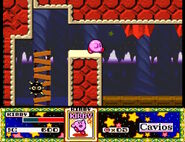